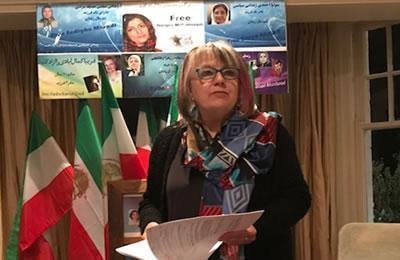 Iran: Solidarity in Sydney with female political prisoners in Iran

A meeting entitled, “Heroic Women in Today’s Iran”, was held on Saturday, April 29, 2017, in Sydney, Australia.

Dr. Meredith Burgmann, former President of the New South Wales Senate, made the opening remarks. She noted Iranian women’s active presence in the struggle against the mullahs’ dictatorship and the fact that 30 per cent of those executed by the regime were women. Then she elaborated on the situation of imprisoned civil rights activist Atena Daemi who is presently on hunger strike. Dr. Burgmann said that she wanted to be the voice of Mrs. Nemati, the mother of political prisoner Atena Daemi.

The speech was followed by remarks of Roksana Sadeghpoor, an Iranian student, who introduced Maryam Akbari, a mother three, who has been sentenced to 15 years in jail for supporting the opposition People’s Mojahedin of Iran (MEK/PMOI). A number of her siblings were executed in the executions and massacres of the 1980s in Iran.

The Sepideh Goudarzi spoke about prisoner of conscience Fariba Kamalabadi who has been in prison for nine years and was not allowed to attend her daughter’s wedding. Part of her letter from prison was read out to the audience.

Participants in the meeting expressed abhorrence at the suppression of women in Iran and called for unconditional release of political prisoners in Iran. They also declared support for women’s active participation in the Iranian people’s organized resistance.