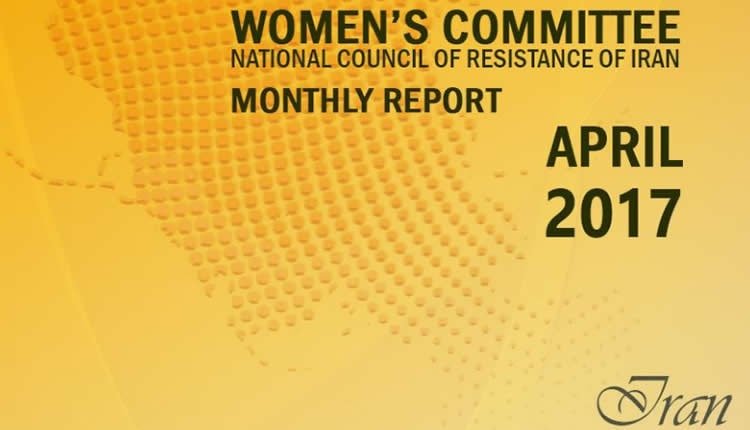 April saw the start of campaigns for presidential and parliamentary election sham in Iran. This is a realm where women are totally deprived or restricted to a great extent to participate and express their opinions, according to the law. Article 115 of the Constitution of the Iranian regime states that the country’s president must be elected from among the religious and political statesmen (rejal). The word rejal literally means men of high achievement.

The Interior Minister Abdulreza Rahmani Fazli confirmed this during a visit to the Election Headquarters on April 11 to oversee registration of volunteers for the election. He said, “The interpretation of the law so far indicates that the term ‘political statesmen’ does not include women.”

In the meantime, pressure on prisoners was further increased in April. On April 12, security forces in the Evin Prison raided the women’s ward, searched their belongings and violently frisked all the inmates.

More pressure was also brought upon imprisoned civil and political activists. They were deprived of fair trials, medical leaves and necessary medical treatment.

Tehran’s Quds Judiciary Complex sentenced the Daemi sisters (Atena, Ensieh and Hanieh) to prison sentences of three months and one day, on April 3, 2017. Tehran’s No. 2 Penal Court had convicted all three sisters based on the “indisputable and incontestable” charge of “insulting agents while on duty”. Athena Daemi started her hunger strike on April 8, 2017, in protest to the sentences issued for the imprisonment of her sisters. She is suffering from kidney infection due to hunger strike.

Judiciary officials refused to grant furlough to human rights activist Nargess Mohammadi who is presently detained in Evin Prison. This is while they have already received a 600-million-touman bail bond for her release.

Ms. Mohammadi has started serving a 10-year sentence as the second stage of her case which began on March 15, 2017.

Civil rights activist Massoumeh Zia who is presently imprisoned in Evin Prison, has been deprived of having telephone contacts with her family. Ms. Zia has been transferred to solitary confinement in Ward 241 of Evin since March 25, 2017, and does not have the permission to have any contacts with her family. She is also deprived of having a lawyer.

Political prisoner Noushindokht Mir-Abdolbaghi, 64, is presently detained in Evin Prison’s Women’s Ward, serving her 34-year sentence. She is accused of acting against national security, collusion against the state, insulting the sanctities, and disseminating false information.

Ms. Mir-Abdolbaghi has received a judiciary ruling according to which she is unable to endure prison conditions due to old age and suffering from schizophrenia. However, she has not been released.

Tahereh Riyahi, a journalist who worked for the state-run Borna news agency, has been held in Evin Prison in an undecided state since December.

Tahereh Riyahi was arrested on December 27, 2016, by agents of the Ministry of Intelligence and taken to solitary confinement at Evin’s Ward 209. She is accused of disseminating propaganda against the state.

The arrests of ethnic and religious minorities continued in April.

In the wake of the Persian New Year celebrations in Nowruz, security forces arrested a young woman in Sanandaj for wearing “unconventional clothes”, namely a dress bearing the flag of Kurdistan.

Chenar Hosseini was subsequently released by signing a written pledge, but she was summoned and threatened again, a number of times.

Sanandaj is the capital of the western Iranian Kurdistan Province.

Four women were arrested by security forces in the southern port city of Bandar Abbas and in the island of Qeshm on April 18, 2017.

The arrested women have been identified as Mahnaz Jonnesar, Maral Rasti, Mehraleh Afshar and Nassim Ghanavatian. They are said to be adherents to the Baha’ii faith. Security forces confiscated the women’s personal belongings and equipment during inspection of their residences.

Iranian women are targets of discrimination and elimination of the possibility of free activities in education, sports, music and art. Samples of last month, make it clear:

The disciplinary committee of Iran’s Bowling and Billiard Federation deprived several female pool players from participating in all domestic and international tournaments for participating in China’s Free Games. The reason for such punishment was mentioned as “failing to observe Islamic principles”. (The state-run ISNA news agency – March 31, 2017)

Only two days left to the start of the International Pars Marathons, Iranian officials announced that the race’s routes have been changed because they could not control the veiling of non-Iranian female participants. Women have been banned from running in the main route. An official of the Athletics Federation, openly defended banning of women and said, “We are staging the tournament in an Islamic country and we must be able to control everything. We cannot hold the women’s marathon race without observing the Islamic codes.”

Mir-Emadi, the Friday prayer leader of Khorramabad, called for cancellation of women’s musical concerts in the city. “If such concerts become a tradition in this city, then the special character and values of the people go under question,” he said. (The state-run Mehr news agency, April 21, 2017)

Director general of the Coroner’s Office in Tehran Province, announced April 17, 2017, that six female workers had died in 2016 due to lack of safety measures at the work place.

Farzaneh Namkhamessi, a working woman in Kamyaran, lost the fingers of her left hand while at work in a Nylon Making Workshop. Kamyaran is located in the western Iranian province of Kurdistan.

At least five cases of suicide among women and young girls occurred this month.

Iranian women held and participated in various protest demonstrations to demand their rights or protest the regime’s policies in different areas.

Sunni women, whose sons have either been executed or imprisoned, described the upcoming presidential elections in Iran unfair and called for its boycott.

In a statement issued on April 22, 2017, the mothers declared, “We must unite against this discrimination, inequality, and execution of our youths. We must cry out in unison that participating in an election whose candidates have their hands stained with our children’s blood is tantamount to endorsement of the same merciless crimes.”

Some 500 family members and relatives of death-row prisoners held a gathering outside the mullahs’ parliament on April 9, 2017, to express their protest to the sentences issued for their loved ones.

The State Security Force intervened and dispersed the crowd. They insulted the participants and confronted women taking part in the protest.

Dozens of retired female teachers staged a protest in front of the Budget and Planning Organization in Tehran on Tuesday morning, April 18, 2017. One of the protesters said, “We demand to receive our termination-of-service reward, proper balancing of pensions, and improvement of medical services provided by insurance.” (The state-run ILNA news agency – April 18, 2017)

Women teachers applying for housing in Zanjan held a protest rally in front of the Governor’s Office on Thursday April 20, 2017. They protested the government’s failure to attend to their housing problems despite passage of 11 years.

Women teachers and pre-school teachers from northern Iranian provinces converged in Tehran and staged a protest in front of the mullahs’ parliament on Sunday April 23, 2017. They demand to be officially employed by the Ministry of Education.

Loss or property and wealth

On the fourth day of registration for the Iranian elections, a woman went to the Interior Ministry and voiced her protest against plunder of her wealth by government-backed institutions in front of the cameras.

She said, “I invested in a licensed institution, the Caspian Credit Institute. I have not come here to (register to) become a president. But what shall we do? It has been five months that they have not given us our interests nor have they returned our money.”

A number of women staged a gathering outside the Central Bank of Iran on Wednesday, April 19, 2017.  They thus protested to the Caspian Financial Institution which had failed to refund their deposits. Dozens of people participated in this gathering and chanted, “Release people’s investments.”

Dozens of women held a protest rally on Monday morning, April 24, 2017, in front of the presidential office in Tehran. The women were protesting the plundering of their lands in Tehran. They accused state officials of planning to take over their lands because they do not issue them permits to build there.