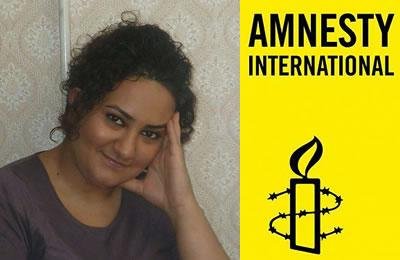 Amnesty international issued an Urgent Action on May 9, calling for immediate hospitalization of Atena Daemi after 31days of hunger strike.

She was briefly transferred to a hospital outside prison on 8 May where some medical tests were carried out but she was returned to prison before even the test results came in. Doctors have warned that her kidney infection has reached critical levels and she needs immediate hospitalization.

AI asked members to write immediately to Iranian authorities urging them to release Atena Daemi immediately and unconditionally, ensure that she has access to qualified health care, quash the convictions and sentences of Hanieh and Ensieh Daemi, and investigate Atena Daemi’s allegations of torture and other ill-treatment, including being subjected to violence during her November 2016 arrest, and ensure that those responsible are brought to justice in fair trials.