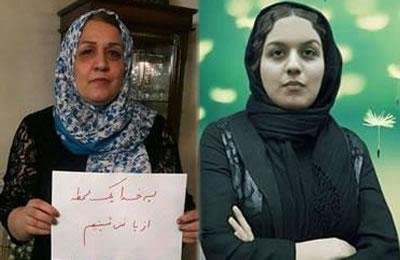 Iran: I will not vote – Sholeh Pakravan

Mrs. Sholeh Pakravan, human rights and anti-death penalty activist, published an audio file on the eve of the regime’s sham election, announcing that she would not vote for the murderers of her daughter, Reyhaneh Jabbari.

Reyhaneh, 26, was executed after serving seven years in jail on October 25, 2014, for defending herself against rape by an Intelligence Ministry official.

Less than a week is left to the sickening show called elections.

I will not vote for any of the six players. Neither the three main players who shamelessly reveal the thefts and crimes of the others in front of everyone’s eyes. Nor will I vote for the other three extras who have joined in to warm up the show.

All of these players have one thing in common: All of them support imprisonment, torture and executions. And the main demand of the people of Iran is also clear. They demand freedom which is not achievable under the shadow of any of these candidates.

People want to know why their young children were killed. Where are they buried? Why and how the people’s treasury was robbed? When public opinion is enlightened, then there might be the need for a much greater election not to choose between bad, worse and worst. Who has said that the people of Iran must choose between a thief, a murderer of youths, a charlatan and an executioner and elect him for the office?

To participate in the election of one of these people is complicity in the destitution they have increasingly imposed on our people, is staining our hands with the blood of those they have killed and will kill in the future, is closing our eyes on the suffering of the survivors of execution victims and ignoring the tears of families whose loved ones have been imprisoned on the charge of being innocent.

Some claim that if they do not choose the bad, then the worse will take office. But what are we afraid of? Was it any different for us when the bad ones and worse ones took office in previous years? Did it ever change the number of executions and the extent of poverty? It would continue to be the same, this time around.

How are we going to vote and forget the eyes of Gohar Eshghi (mother of the slain web blogger and labor activist Sattar Beheshti who was tortured to death in 2012)? How could we not remember the last gaze of Neda Agha Soltan? How can we forget the voice of Arash Sadeghi? And the voice of Shahram Ahmadi? How are we going to forget the beheaded childhood of Riyan and Rwayda, and other children whose fathers have been executed? How can we forget the children who stay with their mothers in the cold cells in prisons? How can we forget the damaged faces of girls whom were splashed with acid and the moaning of a mother who reads the news of her child’s execution in the newspaper… and the pain and suffering of the prisoners and their families?

I will never forget the depressed youths (who have no hopes for future) and the ashamed fathers (who are not able to feed their families), nor will I forget the poor people who have to sleep in the graves (because they have no homes).

We would better forget to forget and every moment remember the destitution imposed on our homeland. If we do so, could we think of voting in the elections? Let them stage their show and celebrate their victory on their own.

One day, not in a distant future, they will be put on trial and brought to justice more disgraceful than ever? This is the promise of history.

History has seen many criminals and thieves in various robes who have ruled over our people’s lives and properties. But today, what remains from them is just a detestable name.

I will not vote for the murderers of thousands of youths.

I will not vote for the thieves who plunder my country.

I will not vote for those who took the innocent to the altar.

I will not vote for the murderers of my Reyhaneh and many more like my Reyhaneh.

Iran: Woman, 64, was battered at home