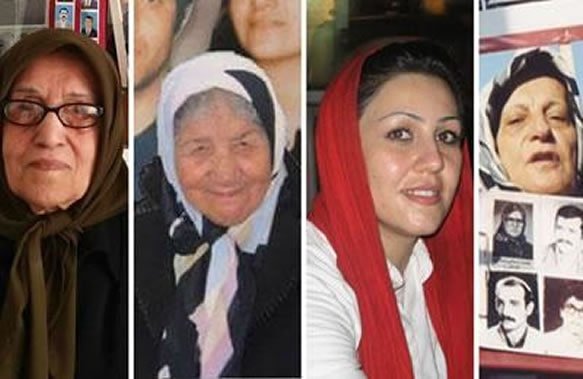 Iran is proud of her mothers

Mother’s Day is celebrated all around the world to pay tribute to mothers and the influence of mothers in society.

A mother incarnates the essence of love, compassion, and altruism and is never affected by any job, social position or status. Such love and compassion, however, take on a much greater dimension when these women get involved in social and political issues against tyrannical regimes.

We have seen these mothers in Argentina, Brazil, Armenia, and Srebrenica, where they became the driving force behind justice seeking movements. In this brief study, we focus on the “mothers” of Iran who have conquered new heights of love and compassion not only for their own children but for the whole nation.

We believe it is an injustice to consider them just as mothers who are motivated by the loss of one or more children. The story of every single one of these women proves their independence as human beings who have chosen to live free. Each of them have a history behind them.

At the frontline of all these mothers is Mother Rezaii. Everyone knows her by this name, whereas her own name is Zahra Norouzi. She has lost six of her children under the dictatorships of the Shah and the mullahs. She is a compassionate woman who despite her suffering has always helped anyone who needed help or a shelter. But she has done much more than these. She has been arrested and flogged a number of times. She has had many interviews revealing the atrocities of the regime and so many more things that have never been recorded.

Let us take a look at another example: Mother Zakeri, a 70-year-old, courageous woman. Despite being a devout and active Muslim, she stood up staunchly against the clerical regime. As the Revolutionary Guards were taking her to stand before the firing squad, she daringly told them not to blindfold her. She said, “I want to see the righteousness of the (opposition) PMOI with my own eyes.” Mother Zakeri had not yet lost any of her children, at the time of her own execution.

Another exemplary mother is Mohtaram Koushali Eaje’ii. She lost four sons, a daughter-in-law and a niece in the struggle against the mullahs’ regime. Once she was asked if she had ever conceived of losing her eldest son, Ala, in the struggle. She replied, “Yes, yes. He had told me, himself. I very well understood that I would lose him one day.”

In the dark era of mass executions and massacre of youths on the streets and in public in the 1980s, Mother Koushali took care of the children who lost their parents in the struggle. She also helped the youths who were attacked in the streets. Once, she took a wounded young man to her house and dressed his wounds, but he lost his life 24 hours later. As she could not inform anyone of this situation, she buried him in the basement of her house single-handed while she had several orphans in the house.

Effat Shahabadi is yet another example. She came from an orthodox religious and at the same time politically oriented family who supported the nationalist Prime Minister Mohammad Mossadeq. She was a respectable woman with a strong personality, popular in the whole family. In September 1971, when her son was arrested by the Shah’s secret police, she got in touch with mothers of other arrestees and they staged a protest. She managed to attend the trial of her eldest son, Ahmad Ahmadi, who was tortured to death in 1975.

After the fall of the Shah, her daughter, Ashraf, was arrested by the clerical regime and executed after seven years of jail during the massacre of political prisoners in 1988. The mother had to take care of Ashraf’s children. Her third child, Ali Ahmadi, was killed in a missile attack on Camp Liberty in 2012.

Her home was attacked time and again over the years and her belongings and property pillaged. She lived in destitution yet did not succumb to the rule of the mullahs.

These stories and more, convince us that these mothers are not only filled by emotions for their children but by passion for freedom and basic human rights for everyone. They have consciously chosen to be part of the universal cause for freedom and in this way they have not refrained from sacrificing their children, their lives and their homes and properties. They have thus written a new chapter in the history of the struggles of Iranian women.

Today, some of them are being tortured in prisons without having contact with their beloved young children. Some endure solitary confinement. Or they stage protests in front of prisons to demand the rights of their imprisoned children.

Today, we can clearly see how much the mullahs are afraid of these mothers and how they can see the demise of their regime in the resonance of their cries.

Iran: I will not vote – Sholeh Pakravan