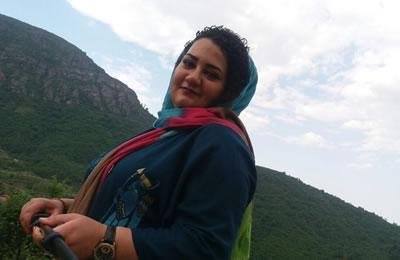 Iran: Atena Daemi boycotts election while on her hunger strike

In the fortieth day of her hunger strike in Evin Prison, Atena Daemi announced that she will not participate in the elections. She wrote in a letter from prison:

“Indeed what is there to vote for? Poverty? Continued sanctions for human rights violations? Group executions? Repression and censorship? Forcible hijab and religion?

“In a society where they convict a singer of apostasy and set a reward for his head for singing a song which has not been distributed yet, what can expect other than cancellation of concerts?

“But we will not get used to these problems. When we ask, why you did not deliver on your promises, they say these issues are not under the government’s control. Or they claim that there are many hands at work behind the scenes. If this is true and the government does not enjoy enough power and competence, why do they spend billions on their campaign advertisements…?

“If I am supposed to vote for candidates that even their supporters crack down on freedom of expression and overlook taxi drivers’ stories of the pains of people, then I, as a civil and human rights activist, will not participate in this sham election.”