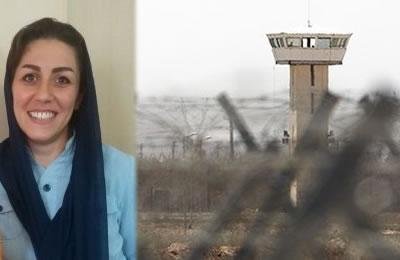 Amnesty International issued an Urgent Action on Monday, May 22, 2017, on the plight of prisoner of conscience Maryam Akbari Monfared, blaming the Iranian regime for taking reprisal for her speaking out against the 1988 massacre of political prisoners, including Ms. Akbari’s siblings.

The AI statement reads in part, “On 13 May, Maryam Akbari Monfared’s husband Hassan Jafari Hatam presented himself to a Ministry of Intelligence office in Tehran after he was summoned by telephone for interrogation. He was given no reasons for the summons. Hassan Jafari Hatam has said that at the Ministry, intelligence officials verbally abused him and threatened that his wife would face an additional three-year prison term and exile to a remote prison in Sistan-Baluchestan province, south-eastern Iran. They said that these threats would be implemented unless she stopped writing open letters about the fate and whereabouts of several thousand political prisoners, including two of her siblings, who were extrajudicially executed in the summer of 1988. Maryam Akbari Monfared has written several open letters since October 2016 when she filed a formal complaint with the Prosecutor’s Office. She is seeking an official investigation into the 1988 massacre, the location of the mass graves where the prisoners’ bodies were buried, and the identity of the perpetrators.”

“To date, the authorities have not processed the complaint. Instead, they have resorted to various punitive tactics,” AI statement added.

“They have refused to take Maryam Akbari Monfared to her medical appointments outside prison to receive adequate treatment for her rheumatoid arthritis and thyroid problems. As a result, she is experiencing severe pain in her legs. They have also repeatedly threatened to stop her family visits.”

Maryam Akbari Monfared has been imprisoned since December 2009, serving a 15-year prison sentence for “enmity against God” (moharebeh). Her conviction in solely based on the fact that she had made phone calls to her relatives, who are members of a banned group, the People’s Mojahedin Organization of Iran (PMOI), and had visited them once in Iraq.