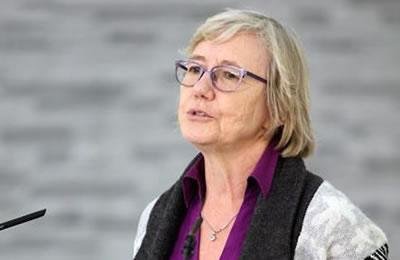 We still have to fight for women’s rights

Member of the Federal Parliament, Switzerland

We still have to fight for women’s rights. There are many lessons for us to learn from dedicated women from Iran and other parts of the world.

Ladies and gentlemen, members of parliament,

Like my French colleague, I have been also very impressed by this invitation and by seeing Iranian women’s deep commitments.

I learned better about the devotion of women in Ashraf despite great pains and suffering. This is a model for us.

Everyone thinks that everything is fine in Europe and in Switzerland while we still have to fight for women’s rights. We do not enjoy equal wages for women. The number of women in the parliament is much less than the number of men. Therefore, we still have to gain many rights. I believe there are many lessons for us to learn from dedicated women from Iran and other parts of the world.

I have been also very impressed by the large number of members of parliament from various countries, even from Zimbabwe, who have travelled long distances (to attend this gathering). I am informed that these countries have had long struggles, initially for racial equality and then for gender equality.

There is a group of representatives at the Swiss Parliament who are committed to the cause of Ashraf. We will do our best, whatever is in our power to convey this message.

We must unite to be the voice of Iranian women