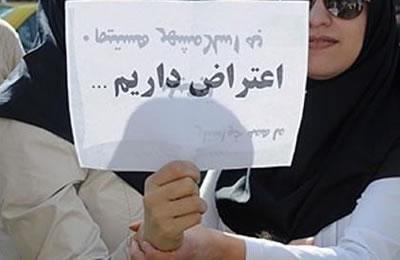 A group of nurses and personnel of Imam Sajjad Hospital in Yasouj, staged a protest on Tuesday, May 30, 2017, across from the Governor’s Office in this city. They demanded receiving their non-paid wages of six months.

The nurses said, “We have not received any salary or benefits for six months and we are in straits. Hospital and university officials have given us only hollow promises.”

One of the hospital staff said, “Some of the staff in this department, have work experience of some three to six years, but their employment status is in limbo. Despite the existing problems, the hospital and university authorities refuse to pay our salaries and benefits.”

Yasouj is the capital of Kohgilouyeh and Boyer Ahmad Province in southwestern Iran.