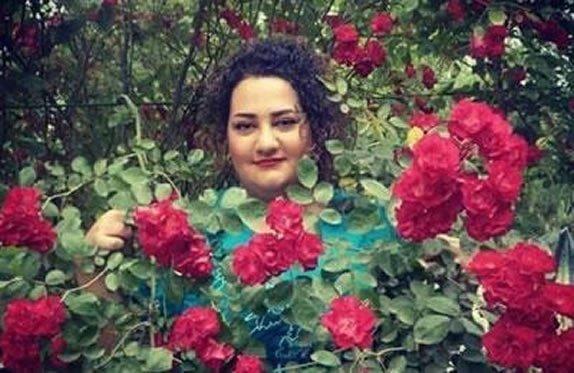 Following is the translated text of the letter by political prisoner Atena Daemi who ended her hunger strike on May 31, 2017, after the court exonerated her sisters from imprisonment.

I went on hunger strike to be the voice of the voiceless.

First, they harassed my father. Then, they filed a new case and sentenced my sisters to jail. An unjust and illegal sentence intended only to hurt my feelings and silence my voice.

As I told the “honorables,” it did not matter whether my sisters’ verdict was one day or one year, whether it was suspended or executed, I would protest the mere act of hostage taking of the families of political prisoners and martyrs fallen for freedom. And on this path, I have no fear of death; death would be my last bunker.

I wanted to be the voice of all those who suffered as a family all these years. My sisters were my excuse to be the voice of Maryam and Reza Akbari Monfared whose four brothers and sister were executed 39 years ago and today, they are in jail for demanding justice for them. After spending eight years in prison without a single day on leave, Maryam has been summoned just recently by security forces and threatened with another jail sentence. As if the shadow of an unfair 15-year sentence is not enough for her three young daughters.

I wanted to be the voice of Fatemeh Mosanna who was only 13 when she was first detained in jail while her three brothers were executed. Now, she and her husband, Hasan Sadeghi, are both in prison with a 15-year sentence.

I wanted to be the voice of Fariba Kamalabadi and Mahvash Sahriari who have already been in prison for ten years and yet, were not able to attend their children’s weddings.

I wanted to be the voice of imprisoned mothers. The imprisoned couple Elham Farahani and Adel Namimi, whose son Shamim was only recently released after 4 years in prison.

I wanted to be the voice of Azita Rafizadeh and her husband, Payman Koushky, whose 7-year-old child, Bashir, writes his childhood memories on the roads between Evin and Rajaishahr prisons.

I wanted to be the voice of brothers, Mehdi and Hossein Honarmandi, who are serving their sentences together. It they were stooges of the government, they would have been certainly freed by now and the sound of their instruments would have deafened the world.

I wanted to be the voice of imprisoned couples. Afarin Neisari and Karen Vafadari whose joint home is Evin. Also the voice of Arash and Golrokh. Arash whose mother was killed by security forces, now has to live his life with Golrokh under the high ceilings of Evin while serving his long sentence.

I wanted to be the voice of the Daneshpour family. The voice of Behnood Ramezani’s parents who were sentenced to prison for inquiring about the reason why their son was killed.

I wanted to be the voice of Mansoureh Behkish who asked about the reason for the execution and the tombs of her six siblings but was responded with a long prison sentence. Or the Zeinali family who asked, “Where is our son, Saeed”, but were arrested and imprisoned.

I wanted to be the voice of our mother Shahnaz who said, “You killed my son. Now, instead of punishing the perpetrators of Mostafa’s murder, free all political prisoners.” But, it turned out that she became a political prisoner, herself.

I wanted to be voice of Payman Arefi whose mother and sister were killed innocently in an accident on the way to visit him. Or the mother of Mohsen Ghashghaii.

I wanted to be the voice of Zanyar and Loghman Moradi. Zanyar prefers to endure prison without his parents’ visit rather than witnessing his parents’ torment. With his young age, Zanyar is bitterly spending the days under the sword of execution.

I wanted to be the voice of all Kurdish prisoners who bravely faced any kind of torture, forced confession, and finally went to the gallows to protect their families from being subjected to the threats of security forces. The dear Dehghani brothers, Shahram, Bahram and Hamed Ahmadi. It is so bitter that the number of those getting arrested from Hossein Panahi family in Kurdistan is rising by the day.

I wanted to be the voice of Maryam Olangi whose husband, Mohsen Dokmechi, died in prison due to officials’ negligence and now Maryam is in prison for paying attention to her husband.

I wanted to be the voice of everybody who left the country for lack security after being released from prison. Who could understand the hardships of forced exile except them and their families?

I also wanted to be the voice of the tomb-stone of (exiled singer) Shahin Najafi’s mother as it was being shattered to pieces, to say that not only us –critics, dissidents and political prisoners– but our family members are also in danger of being arrested and imprisoned, in addition to all the threats and insults and pressures they have to endure due to persecution of their loved ones.

Fifty-four days ago, I started my hunger strike while I did not want to be an additional pressure on my suffering cellmates. Nevertheless, during those days when I was thirsting for a single drop of water, I saw them vomiting their lives every day and every time I vomited or felt nausea. I was ashamed that they had to witness my suffering. Their cries of protest against the authorities’ lack of attention to my condition shook the walls of the ward. They were threatened and punished but did not leave me alone. I bow in respect to each and every one of them.

I was on hunger strike for 54 days and my family were tortured by watching me walking in frail condition up and down the stairs in the Prosecutor’s Office and the court while officials paid no attention. They melted down along with me, but they accompanied me and became my voice by their courageous and unique resistance. The Intelligence Ministry threatened them but they stood firmly and continued to stand by me. I kiss my father’s tired feet and my mother’s hands who wrote for me. I kiss my sisters’ tearful eyes who did not want to see me hurt for their sake, while actually they were the ones who had been targeted for my sake. I thank them for standing by my side.

Yes, I wanted to be the voice of the voiceless, but I was crushed by propaganda at the height of the election campaigns. However, it was you, the honorable people who became my voice and stood with my family. I do not know you and may never do so. Or the pure friends who have always been beside me. If it weren’t for you, I would have never succeeded after 54 days. Surely, I have to name many people but I cannot due to security reasons.

54 days on, it is not me, but you, who succeeded with your extensive support, with your pens, your cries, your poems and songs, paintings, etc. You made this victory through whatever possible means, which is very sweet for all of us.

I thank all human rights organizations.

After 54 days of hunger strike, I and you, won my sisters’ exoneration verdict and this is only the beginning. This is the beginning of the way of standing up to the persecution and harassment of the families of martyrs and political prisoners.

With this victory which was made possible with the support of you, dear friends and supporters, I will end this hunger strike today, May 31, 2017. And I thank each and every one of you companions.

In the hope of freedom