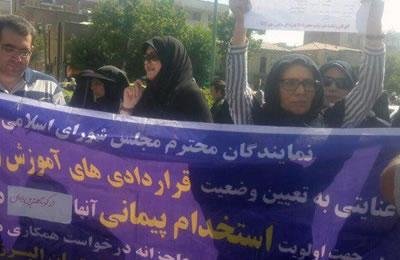 More than 1000 women, teachers, staged a major protest outside the parliament in Tehran on Tuesday, June 6, 2017, demanding determination of their employment status.

One of the literacy teachers said, “If a literacy student, for example a mother with several children, does not take part in the final exam due to illness of her children, we won’t get paid for our work.”

Simultaneously, another group of women staged a gathering in front of the Majlis in protest to the looting by Caspian Credit Institute. They hold the Central Bank officials accountable for their looted deposits. (The state-run ISNA and Fars news agencies – June 6, 2017)