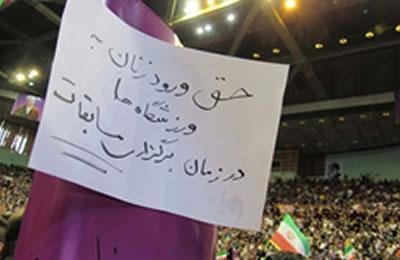 Iran: Women tweet to protest ban on their presence in sports stadiums

Iranian women and other users of twitter have tweeted on a Farsi hashtag, the rights of 49% of the populace (women), to express their protest to the continued ban on women’s presence in sports stadiums in Iran.

On Tuesday, June 6, 2017, women who referred to the website selling tickets for the World League volleyball games, encountered a message of “sold out” for women.

A female journalist reporting on sports said, “We learned that, as in the past, a number of women have been allowed into the stadium as a theatrical measure to claim that the authorities have allowed women into the stadium, while the website selling the tickets displayed a ‘sold out’ message since the very first minutes of the sale of tickets if you chose female as gender.”

The restriction on entrance of women to sports stadiums remains despite promises by Hassan Rouhani to provide the opportunity for women to enter stadiums.”