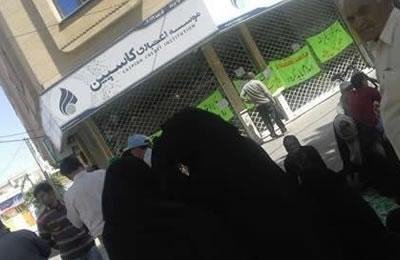 Tehran: A number of women participated in a protest at Tehran’s International Exhibition on Tuesday morning, June 13, 2017, in protest to the looting of their properties by the Caspian Credit Company. They chanted, “Bankrupt Caspian is sitting on our money.”

Isfahan: A similar protest gathering was held on the same day by women in front of the Caspian’s branch in Isfahan.

Neishabour, Khorassan: Women gathered outside Caspian’s branch in this city while holding a big banner which read, “One less embezzlement can solve our problem.”

Harsin, Kermanshah: Women staged a protest on Monday, June 12, 2017, outside the Caspian Credit and demanded refund of their deposits with this company.

Mashhad: Women from across Razavi Khorassan Province gathered outside the Govenor’s Office in Mashhad in protest to the looting of their properties.

Iran: Girl students stage protest outside the Ministry of Sciences