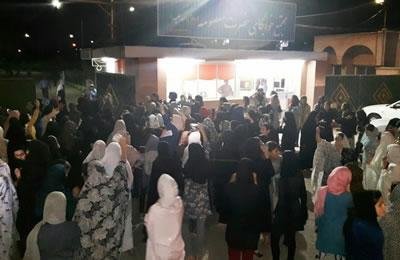 Girl students boarding at Massoumeh dormitory of Chamran University of Ahvaz staged a gathering on Wednesday night, June 14, in the dorm’s courtyard in protest to the dormitory’s dysfunctional cooling system.

The dormitory’s security forces closed the door on students who wanted to leave the dormitory and join the gathering, a measure which lead to the students’ protest.

Ahvaz is the capital of the oil-rich province of Khuzestan, southwestern Iran.

Students staged another protest on Thursday night, June 15, calling for the resignation of the university president whom they described as incompetent. The protest took place in the wake of an interview by the university’s president with the state television, denying the existence of any problems in the university.

The state-run Tasnim news agency, cited one of the students as saying, “At 7.45 p.m., everyone gathered in the dormitory and talked to the director (Ms. Sharifi) and expressed their complaints. But Ms. Sharifi tried to justify everything as she always does. The students were marching towards the Control Room when the dormitory’s security sealed off he entry and exit doors and did not allow anyone to leave.”

The student said they have not received any answers from officials and instead have been threatened to be summoned to the disciplinary committee.

Mohammadian, director in charge of dormitory affairs at Chamran University, also went to the dormitory but said that he could not do anything about the situation. (The state-run Tasnim news agency, June 15, 2017)

Thousands of Iranian women gave their lives for freedom