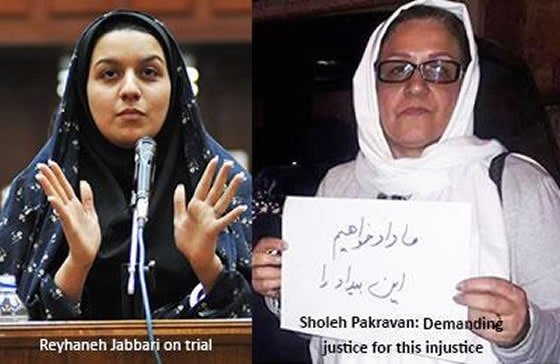 June 20, 1981, was a turning point in the history of the struggle of the people of Iran in their quest for freedom

Today, we are remembering political prisoners, both those who were killed in the past decades and those who are presently in prison.

It was the day they opened fire on our people’s demonstration.

Afterward, only the names of young boys and girls who had been executed were announced in the newspapers.

Those days I didn’t understand anything.

I didn’t know the meaning of getting arrested and executed.

Arrest and execution were just two words for me and I didn’t comprehend the extent of suffering hidden in just those two words.

I was not aware and I am ashamed of myself for not being aware.

I didn’t understand the meaning of their disappointment and easily forgot them.

When I say I am ashamed of myself, I mean that if I and all of us stood together in those days, maybe they couldn’t have adopted inhumane laws.

Maybe we could have prevented non-independent judges from presiding the courts.

Maybe the so-called courts and dictated verdicts would not have taken shape.

Maybe justice would not have got lost in my homeland.

Maybe my daughter would not have been denied justice and today, she could laugh and be happy under the shining sun.

So long as there are political prisoners, and so long as the death penalty has not been revoked, years would pass one after the other and we will have to commemorate great people who have been subject to injustice, without bringing any change in the fate of today’s children and tomorrow’s prisoners, today’s youths and tomorrow’s fodder for the killing machine.

For years, we have witnessed the judiciary and the government stand against our people’s righteous demands.

In the past several decades, we have witnessed how they have wrapped more chains step by step around our nation’s body and soul…

Ismail Abdi went on hunger strike to protest the trampled rights of teachers. (And other hunger strikers such as) Jaafar Azimzadeh, Arash Sadeqi, Saeid Shirzad, Rajabian brothers and Atena Daemi…

Holding memorial ceremonies, seminars, and conferences is just the beginning of this road.

When the same laws and the same injustices and the same suppressive methods have continued for nearly 40 years, it is upon us to look for other ways to restitute our rights and establish justice.

So that we would not be ashamed before future generations and our beloved blood-drenched youths who were slain in contemporary history.

On that day, we will sing together that our quest for justice has borne fruit.

As a survivor of execution victims, I would not sit silent and will continue to seek justice until a just trial is held for those who killed my innocent child.

I will pave the way forward along with thousands of others who seek justice, the abolition of the death penalty, banning of torture, and freedom of prisoners of conscience.

No to executions in any form and under any pretext

*Sholeh Pakravan is a human rights activist and an anti-death-penalty campaigner. Her daughter, Reyhaneh Jabbari, was hanged on October 25, 2014, after seven years of imprisonment at age 26, for defending herself against rape by a high-ranking official of the Intelligence Ministry who had posed as a client for interior decoration.

Iran: 169,000 children deprived of education in Sistan and Baluchistan