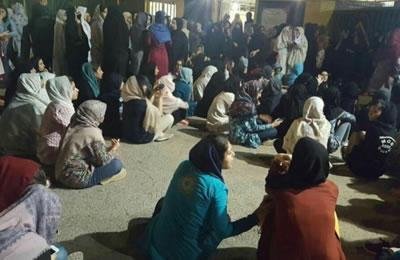 Female students of Chamran University faced problems with the cooling system in their dormitories in the 50-degree-Celcius heat in Ahvaz during the fasting month of Holy Ramadan. The failure of university and dormitory officials to attend to this problem led to student protests.

Female students boarding with Massoumeh Dormitory of Chamran University staged a protest Wednesday night, June 14, 2017, to voice their protest to the officials in charge. Despite previous promises, officials had failed to fix the broken cooling system and the conditions were intolerable inside the dorm.

One of the female students said her friends had suffered nose bleeds and sudden drop in her blood pressure due to excessive heat.

Nevertheless, instead of responding to their needs, officials intimidated the students by threatening to report them to the university’s disciplinary committee.

Shortly after the initial gathering got together outside the dorm, security forces closed the gates of the dormitory to prevent other students from joining the protest. This led to further protests.

Those who had already gathered outside, demanded to have a functional cooling system as their inalienable right. They also demanded the resignation of the university’s president, Gholam Hossein Khajeh, whom they deemed to be incompetent.

The students also questioned the university president’s remarks made in an interview with the state television where he denied any problems in the university. A number of students called him a liar in their chants.

After the first night of protest, officials provided some fans to the students. They also prepared another place for some 200 students to spend the night. The students, however, did not accept to leave the dorm.

Some 700 students reside at Massoumeh Dormitory of Chamran University. To provide temporary residences outside the dorm for only 200 students was not acceptable to the students. So, they staged another protest on Thursday night, June 15, 2017.

To silence the protesting students, officials took a carload of ice to the students, which again caused further protests. The students did not allow the car to enter the dorm. The girls said they wanted a response to their main demand.

The broken cooling system of Massoumeh Dormitory in the 50-degree-Celcius heat received widespread reactions on the internet. The hashtag #daneshjoopazi (cooking the students) went into the trend.

Users wrote in their comments:

Ahvaz is the capital of the oil-rich province of Khuzestan in southwestern Iran.

A Study on Iranian Women's Participation as Governors, Mayors and Members of City Councils