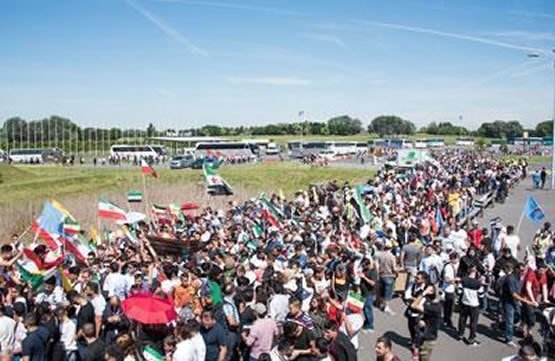 Gearing Up for a Free Iran

Every year in June, tens of thousands travel from across the world, descending on Paris for an annual convention hosted by The National Council of Resistance of Iran (NCRI). The gathering, known as ‘Kahkeshan’ by its attendees, brings together a galaxy[1] formed by a diaspora of devoted human rights and democracy activists, hundreds of global dignitaries – ranging from Members of Parliament and Congressional Representatives, to various leaders throughout the European Union and across the Arab world – as well as, most notably, the largest opposition to the theocracy in Iran, the NCRI, together with their president-elect Mrs. Maryam Rajavi.

While each year’s program takes on a unique shape, the central focus and message remains the same: issuing a clarion call for democratic regime change in what is presently the Iranian regime.

A number of factors set this event apart from the range of demonstrations, marches and conference-style initiatives, which many of us, in the public sphere, have grown accustomed to:

Last year’s impressive list of attendees included Congressional Representatives from either side of the isle, European heads of State, as well as delegations from Asia, Canada, Africa, Australia and across the Middle East, including Palestine, Jordan, Saudi Arabia and Syria, just to name a few.

Despite the Iranian regime’s brutal crackdowns on satellite TV owners and heavy monitoring of the internet, millions of Iranians tune into Simay Azadi, a channel broadcasted by the NCRI and its affiliates, to receive inspiring messages of hope and solidarity from the international community as they continue their domestic struggle for democratic rights and equality. In fact, in the lead up to each year’s event, the station regularly receives calls from Iranian citizens who risk their own well being in order to offer modest donations and express their support.

Rejecting the false and destructive paradigm in which war and/or appeasement are touted as the only means by which real regime change can be achieved, the NCRI and their president-elect Mrs. Maryam Rajavi breathe new life into arcane policies, mantling ‘peaceful regime change by Iranians’ as the only appropriate course of action. In principle and in practice, women spearhead the organization with the overwhelming support of their male-allies who hold confidence in women’s leadership. While seeking international support to keep Iran’s regional influence to an absolute minimum, at its heart, the organization’s plight centers on the fundamental belief that lasting and meaningful regime change in Iran can only be achieved through simultaneous efforts aimed at overcoming gender-inequality.

Besieged and submitted to the cruelest forms of misogyny under the current regime, Iranian women have born the brunt of Tehran’s suppression. As with most experiences of long-standing abuse and degradation, not all the scars left behind in the wake of such violence are visible. This is why, resisting the harsh standards imposed on women for centuries and, especially, the misogynistic policies upholding the present regime’s balance of power, Mrs. Rajavi’s doctrine, and the many thousands who join her in this struggle, seek to defy the status quo and empower the brilliant minds, which, for generations have been kept under the yoke of patriarchy and slavery. Cautioning against foreign intervention while denouncing for-profit policies that bolster Iran’s Guardianship and Supreme Leader Ali Khamenei, the annual gathering in Paris serves to remind audiences, both near and far, of the importance of international solidarity as Iranians continue their own struggle towards fostering an engaged, informed and self-confident citizenry prepared to take back the rights they so desperately deserve.

[1] Kahkeshan translates to ‘galaxy’ in English.