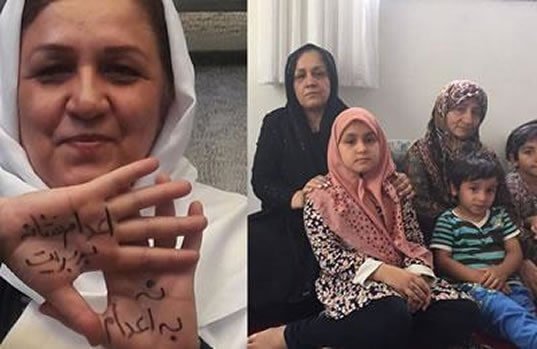 Iran: Greetings to those who gathered for human rights and freedom

Iran: Greetings to Those Who Gathered for Human Rights and Freedom

Following is a post written by Sholeh Pakravan under the title of “Who would help me?”

Sholeh Pakravan is the mother of Reyhaneh Jabbari who was hanged on October 25, 2014, for defending herself against rape by an official of the Intelligence Ministry.

The following post was published on July 1, 2017, simultaneous with the gathering in Paris of Iranians for a free Iran.

Greetings to those who have gathered for human rights and freedom, and to say no to execution and torture. Greetings to all the Iranians who have come to show their solidarity with their oppressed nation, and to stand with mothers who are waiting for the day when they can avenge the deaths of their loved ones.

Nearly ten years have passed since the day my daughter managed to save her life after a battle with the assailant agent of the Intelligence Ministry.

After that incident, she was subjected to flogging, kicking and solitary confinement, interrogations and unfair trials. The specter of death haunted her all the time. Nevertheless, she resisted against the demands of the Judiciary and the Intelligence Ministry who wanted her to write a (false) letter to exonerate their pervert agent. But she preferred to die and said no. She left me and I stayed alone with a bleeding heart, wondering about the obvious injustice done to us.

I was left alone with a big cry stifled in my throat, a cry against the injustice done to my daughter. I survived her death to go on a journey to the houses destroyed by these very death sentences.

I visited a house where all of their men, from two generations, had been executed one after the other. I heard many stories of women whose executed husbands had been buried in their own yard, the same place where they raise their little children.

I have seen teenagers who have been robbed off their youth when their fathers or mothers got killed in the massacre of 1988. I survived to see the empty table spreads of the survivors of execution victims, those who had been hanged for being addicted by towing cables that left their bloody scars on their throats.

I remained to see the furious tears of a mother whose son had been run over by the State Security Force’s vehicle. I saw the blisters on the soles of the feet of a mother who had been looking for her missing son, Saeed, for 17 years.

I spent time with a mother who took advantage of a moment of guards’ negligence to see the corpse of her son who had been shot directly in the head in a Tehran street, just like Neda (Agha Sultan), Kianoush (Asa), and Sane’e (Jaleh).

I was left to hear a man speak of 50 executed members of his family. To hear from mothers who had lost five children to execution and who did not have even a tombstone where they could whip. Khavaran cemetery (with its unmarked mass graves) has become their sacred shrine.

I wandered from one city to the other to talk to the survivors of executions. I saw the 4-year-old Riyan whose father and uncles had been executed because they were Sunnis. I saw Rowaida who was about to go to the first grade, when her father’s execution slapped her in the face.

The more of these people I found, I better understood that justice has been lost in my homeland. And my homeland yearns for justice and freedom. When Reyhaneh was hanged, I felt as if I was burning in fire. Such visits added fuel to this fire and gave me an iron will to struggle to eliminate the death penalty.

Today, on the eve of the 10th year of my daughter’s battle, I know that in addition to the prosecution and punishment of the executioners and judges who were involved in her death, I also want to have justice and freedom, so that no one would dare to kill Sattar (Beheshti) under torture.

As my daughter became the daughter of millions of mothers, I have also become the mother of thousands who have been slain.

I believe that thousands of hands would be extended to me. These hands will not leave the flag of justice seeking on the ground.

I know that Reyhaneh and other victims of execution will not return, but the Reyhanehs of future will smile. I know this is a difficult path, but I will remain loyal to the pledge I have made to the valiant children who lie buried under the earth.

Now, here I am, mother of 1000s of Reyahnehs. A drop in the sea but beyond every religious or political belief, I extend my hand and I reach out to others who can help.

Who is going to help me?

Women lead force for change for a free Iran