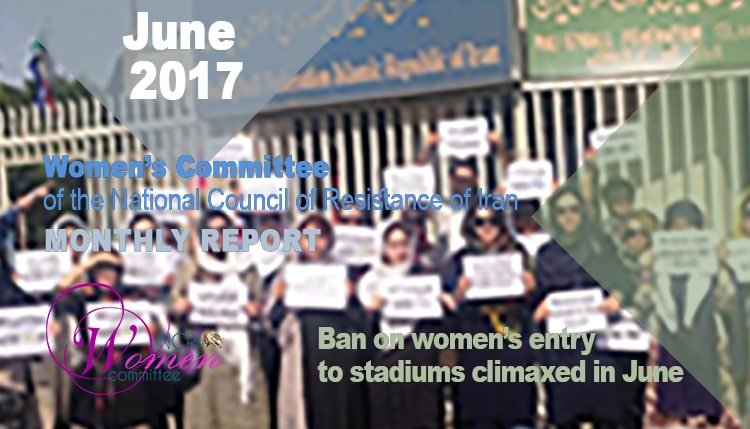 Ban on women’s entry to stadiums climaxed in June

Denying women’s entry to stadiums to watch sports competitions once again climaxed in June, attracting attention to the lingering discrimination against women in Iran.

Women’s tickets were announced “sold out” by the website selling tickets for the FIVB Volleyball World League 2017 in Tehran in the first hour of sale on June 6. Those attempting early to purchase tickets on the website saw this message: Unfortunately, women’s quota of tickets has been SOLD OUT.

The website also had some warnings before sale of tickets. One such warning read: Ticket quotas for men and women are completely separate and it is not possible to swap tickets between the two. Spectators who purchase tickets from the other’s share will not be allowed to enter the stadium.

A female journalist reporting on sports said, “We learned that, as in the past, a number of women have been allowed into the stadium as a theatrical measure to claim that the authorities have allowed women into the stadium, while the website selling the tickets displayed a ‘sold out’ message since the very first minutes of the sale of tickets if you chose female as gender.”

A number of women held a banner and staged a protest in Tehran in mid-June against the ban imposed on their entrance to Tehran’s Azadi sports stadium. The banner read, “Entering Azadi Stadium is my right.”

Iranian women and other users tweeted a Farsi hashtag, “the rights of 49% of the populace (women),” to express their protest to the continued ban on women’s presence in sports stadiums in Iran.

These protests, however, met threats by Ansar-e Hezbollah. The Coordinating Council of the Ansar-e Hezbollah in Iran issued a warning against women’s presence in the stadiums and declared that it would use Khamenei’s order of “fire at will” to deal with it. (The state-run ILNA news agency – June 17, 2017)

Hossein Allah-Karam, head of the coordination council of Ansar-e Hezbollah, published the statement on his Instagram and wrote, “This organization has complaints about the Ministry of Sports and Youths which has illegally and unlawfully dragged hundreds of women and girls as spectators to the recent volleyball games of men.”

Hezbollah students also issued a declaration on Friday, June 16, to the speaker of the mullahs’ parliament (Majlis), Ali Larijani, in which they demanded prohibition of women’s entry to stadiums to watch the World League Volleyball games in Tehran. The declaration read in part, “Please order tending to this matter, otherwise, we would have to prevent it based on Khamenei’s ‘fire at will’ order….”[1]

The Ansar-e Hezbollah is protesting women’s entry to stadiums while it has not been facilitated, yet. Only a limited number of women attended the first game played by Iran’s national volleyball team.

Shaqayeq Yazdani, wife of the team’s medical doctor, wrote in her Instagram in this regard, “Unfortunately, entry to the stadium has not been sanctioned for all women and only the wives and families of members of the national volleyball team whose names have already been registered by the federation can enter after providing proper identification.”

Alamol-Hoda, Khamenei’s representative in Mashhad, reacted on June 11, 2017. He said, “If it is decided that a group of boys and girls gather and a bunch of women and girls create excitement in the sideline of an athletic championship race, clap and whistle and jump up and down, then this would be indecent. And indecency is an epitome of sin.” (The state-run Aparat website – June 11, 2017)

Women were not allowed in to watch the Pakistan-Iran volleyball match on May 1, 2017, in Rezazadeh stadium of Ardabil, East Azerbaijan Province. They voiced their protest against such discrimination. The cancellation without prior notice was made despite previous approval letting women into the stadium to watch the game.

Eight young women who attempted to enter Tehran’s Azadi Stadium to watch the game between Persepolis and Esteghlal football teams, were arrested on February 12, 2017, during inspections before passing the entrance gate. (The state-run ISNA news agency – February 14, 2017)

Female reporters were not allowed entry to the stadium to take pictures of the football match between women of Iran and Russia. ISNA’s headline read, “Female reporters do not enter, the Russians are not wearing the veil!”

“The women’s national football team of Iran was hosting the world’s second champion, when the Football Federation ironically banned entry of women reporters and photographers to this competition.” (The state-run ISNA news agency – October 17, 2016)

In August 2016, Shahindokht Mollaverdi, Rouhani’s deputy in women and family affairs, stressed in a news conference that the issue of women is “a political issue.”

Women’s presence in sports stadiums was restricted in post-Revolutionary Iran and in line with the clerical regime’s views and policies of sex segregation.

Nevertheless, Iranian women and girls have continued their efforts to gain equal rights. They believe that being able to attend the games in sports stadiums is a step towards elimination of inequality and gender discrimination and they will keep up their struggle in this regard.

In the 1990s and 2000s, women demanded to be able to watch the games and the Asian and World sports federations brought pressure on the regime to end the ban.

Women tried to enter the Iran-Germany football match in 2004.

On September 9, 2012, the State Security forces prevented entry of 1000 female spectators to watch the game between Iran and Japan volleyball teams.

The state-run Etemad newspaper, reported on June 20, 2014, that in the margins of the Iran-Italy volleyball games, the State Security forces and security forces prevented women’s entry to Azadi sports stadium. According to this report, female journalists who carried special ID cards were not allowed to enter the stadium, either.

In July 2016, although Iran’s Volleyball Federation had announced that it had sold 466 tickets to women, those who had referred to the website to buy tickets in very hours, they saw this message: “Due to limits on the sector related to women, women’s ticket has been finished and there are no more tickets available until further notice.”

Subsequently, the state-run TV also showed images of women participating in the game between Iran and Serbia. What was common among female participants in the stadium was that most of them were wearing the black Maghna’eh (tight head cover) and manteaux and they did not show much excitement, either.

The women present in the stadium were reportedly, the relatives of the players or staff of the Sports Ministry. They had been told to be “conventional and act within limits” in encouraging the players. Their number was also far below the announced figure and amounting only to some 200 people.

[1] Ali Khamenei, the mullahs’ supreme leader, used the term, “fire at will”, in a speech on June 7 to a group of youths whom he called “officers of the soft warfare.” He said the young men had permission to “fire at will” to criticize the cultural policies of the government.