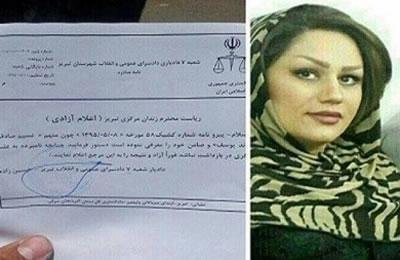 In a telephone contact with Nasim Sadeghi, the Revolutionary Court of Tabriz instructed her to appear in court at the first Branch on Saturday, August 15, 2017, when her charges will be examined.

Ms. Sadeghi was arrested on July 28, 2016, after participating in a street demonstration in protest to some controversial articles published by the provincial newspaper of Tarh-e no (New Design). She was accused of acting against national security.

After five days of imprisonment and interrogation at the Intelligence Department of Tabriz, she was temporarily released on a 100-million-touman bail bond (about $30.700) until the court convenes for her trial.