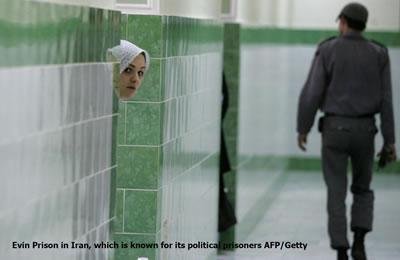 The following article by Raha Bahraini, Amnesty International’s Iran researcher, appeared on the website of British daily INDEPENDENT on July 13, 2017.

Independent: Iran just gave foreign delegates a tour around a ‘luxury’ part of one of their most notorious prisons

A UK representative was present on the tour, viewing wings that house wealthier prisoners, while British-Iranian charity worker Nazanin Zaghari Ratcliffe languished in a building nearby

Last week the Iranian authorities arranged a rare international visit to one of the country’s most infamous places of detention – Evin Prison in Tehran.

This visit wasn’t arranged for an international prison expert or a human rights body. It was for representatives of over forty foreign diplomatic missions from Europe, Asia, Africa and South America. The UK had a representative there.

The foreign delegates were shown around some limited areas of the prison, and there was a roundtable discussion, held outdoors in a lush garden. There are photos in circulation and you can see various countries’ flags perched on al fresco tables, the Union Jack amongst them. By the standards of diplomatic meetings, it all looks rather idyllic.

But what was it all for? For the Iranian authorities it was very clearly a PR exercise. In the days after the visit, Iranian state media outlets were flooded with gushing stories about Evin’s supposedly state-of-the-art conditions. The “excellent facilities” were showcased, including an in-house beauty salon, a gym, a library and even a restaurant. And articles featured congratulatory comments from the Indian, Indonesian, Portuguese and South Korean delegates.

What these stories left out was the fact that Evin is a vast prison complex made up of multiple buildings where conditions vary enormously. The visitors saw only a handful of sections in buildings 4 and 7, mostly housing wealthier prisoners convicted of financial crimes. In these areas prisoners have used their own money to improve conditions, buying carpets, curtains, televisions, air-conditioning units and kitchenware. The beauty salon, gym, library and restaurant are only accessible to prisoners held in building 7.

Away from these select parts of Evin, things are much bleaker. Research reveals widespread inhumane and unsanitary conditions. There’s chronic overcrowding, severely limited hot water, poor ventilation, and infestations of cockroaches and mice. Prisoners have described being forced to sleep on the floor because of a shortage of beds and being fed “barely edible” meals.

Unsurprisingly the visitors didn’t see any of this.

Ahead of the visit, some prisoners in building 4 were also transferred to create an illusion of humane living conditions. Walls were freshly repainted and the remaining prisoners warned against approaching the diplomats to voice any concerns they might have.

Meanwhile, the delegation was entirely barred from accessing areas of Evin controlled by the Ministry of Intelligence and Revolutionary Guards, where detainees are routinely held in prolonged solitary confinement and tortured. Similarly, they weren’t allowed to see where the dozens of prisoners of conscience are held. This includes building 350, where the prominent human rights lawyer Abdolfattah Soltani and severely-ill human rights activist Arash Sadeghi languish; building 8, which holds human rights activist Omid Alishenas; and the women prisoners’ wing where human rights activists Narges Mohammadi, Golrokh Ebrahimi Iraee and Atena Daemi are serving their sentences.

And neither were they able to meet several dual-nationals jailed on spurious charges, including the British-Iranian charity worker Nazanin Zaghari-Ratcliffe or the British-Iranian businessman Kamal Foroughi. Meanwhile, the Iranian-born Swedish resident Dr Ahmadreza Djalali was transferred to solitary confinement for the entire duration of the visit.

After the delegation had made their Potemkin village-like tour of Evin, Kazem Gharibabadi from Iran’s High Council of Human Rights said that Evin’s supposedly comfortable conditions are typical of the country’s high prison standards. With one ludicrous claim after another, he insisted that prisoners in Iran enjoy “perfect access to medical care” – notwithstanding a report from last year showing how Iran’s political prisoners are denied access to adequate medical care as a particularly cruel form of punishment.

Back in the real world, Gharibabadi’s remarks are an affront to the hundreds of prisoners – peaceful activists, journalists, intellectuals and human rights lawyers – who’ve suffered miserably at Evin throughout its disgraceful history. Every year, scores of prisoners in Evin and other prisons go on hunger strikes in protest at appalling conditions.

The unvarnished, un-PR-able truth about Evin Prison is that it’s a place of suffering and torment as well as a wider symbol of rampant political repression in Iran.

The foreign delegates may not have known the details of their highly-controlled visit in advance, but it should be clear to them now they’ve been used by the Iranian authorities in a piece of propaganda. They ought to speak out against torture and other ill-treatment of prisoners in Iran, as well as the arbitrary detention of human rights activists and other peaceful critics. And they ought to demand that the Iranian authorities open Evin and other Iranian prisons to independent international monitors.

This wasn’t a genuine prison visit; it was crude political theatre.