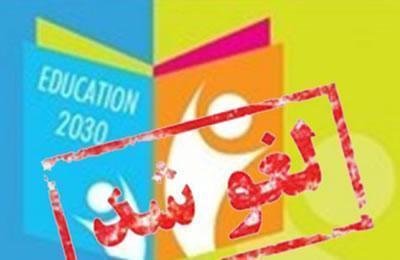 The state-run media in Iran published a document signed by the Iranian regime’s Vice President Is’haq Jahangiri, according to which all government decisions regarding the implementation of the UN Education 2030 document have to be annulled.

The Education 2030 document (SDG4) turned into a high profile issue of controversy between rival factions during the presidential election campaign in May. The mullahs’ supreme leader Ali Khamenei ultimately weighed in to have the document removed from the government’s agenda and revoke the regime’s commitments made to it, albeit with reservations.

Referring to the document, Khamenei said, “The UNESCO 2030 education agenda and the like are not agendas that the Islamic Republic of Iran should have to surrender and submit to.” (Khamenei.ir website – May 7, 2017)

Finally on June 13, 2017, the Supreme Council of Cultural Revolution (SCCR) meeting presided by the mullahs’ president Hassan Rouhani decided to stop implementation of the agenda in education and instead consider the Fundamental Reform Document of Education (FRDE) adopted under Mahmoud Ahmadinejad in December 2011, as the benchmark for all educational affairs in the country.

Less than a month later, on July 9, 2017, Rouhani’s cabinet also officially voted to annul the Education 2030 document and dismantle the working group formed for its implementation. The document signed by Vice President Is’haq Jahangiri was published by the state-run media. (www.irinn.ir/fa/news/ – July 12, 2017)

The Women’s Committee of the National Council of Resistance of Iran published a study on the clerical regime’s views, indicating that gender equality and equal opportunities for women target the heart of the fundamentalist regime ruling Iran and indeed, this is the essence and root cause of the regime’s animosity and antagonism to Education 2003 Framework for Action and the Agenda 2030 as a whole.