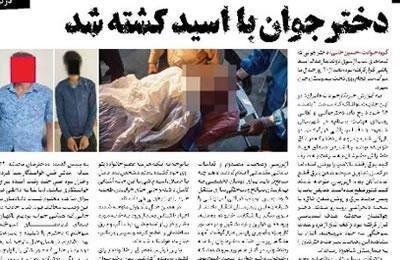 A young woman in a Shahrood village was splashed with acid after midnight by two masked men. After 20 days, she finally died in hospital on July 8, 2017.

Her father explained about the incident, “On the night of this incident, everyone was asleep. Suddenly, we heard my daughter who was screaming, ‘I’m burning, I’m burning.’ We quickly got up and found out that two men who had covered their faces with black fabric were running away.”

Mohaddeseh died due to severe burns caused by acid and infection. (The state-run Iran newspaper, July 11, 2017)