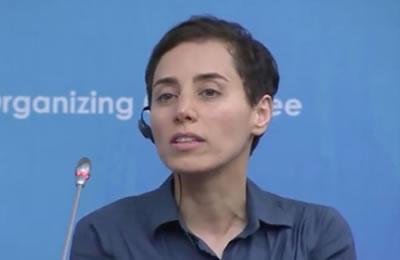 Maryam Mirzakhani, a genius in mathematics and the first woman to win the Fields Medal in math, died today, July 15, 2017, in a hospital in the United States.

She had been battling with cancer for four years, the news of which spread only three days ago.

The Women’s Committee of the National Council of Resistance of Iran extends its condolences on the tragic demise of this great woman and genius mathematician to her family, to the women and people of Iran, the scientific community and the women of the world.

Maryam Mirzakhani was born in 1977 in Tehran, Iran. She went to Farzanegan (Exceptional Talents) high school in Tehran.

She obtained her BS in mathematics (1999) from Sharif University of Technology in Tehran. Then she went to the United States for graduate work, earning a PhD from Harvard University (2004), where she worked under the supervision of the Fields Medalist Curtis McMullen.

At Harvard University, she tackled a problem that had stymied many a mathematician: calculating the volumes of moduli spaces of curves-geometric objects whose points each represent a different hyperbolic surface.

The Popular Science journal picked Maryam Mirzakhani among the annual Brilliant Ten in 2005.

She was also a 2004 research fellow of the Clay Mathematics Institute and a professor at Princeton University.

Mirzakhani has made several contributions to the theory of moduli spaces of Riemann surfaces.  Her subsequent work focused on Teichmüller dynamics of moduli space. In particular, she was able to prove the long-standing conjecture that William Thurston’s earthquake flow on Teichmüller space is ergodic.

Mirzakhani was awarded the Fields Medal in 2014 for “her outstanding contributions to the dynamics and geometry of Riemann surfaces and their moduli spaces”. The award was made in Seoul at the International Congress of Mathematicians on 13 August.

She was married to Jan Vondrák, a Czech theoretical computer scientist and applied mathematician who is an associate professor at Stanford University. Her daughter, Anahita, is six years old.