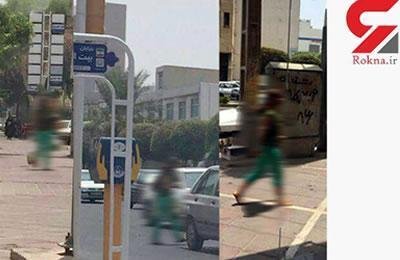 Iran: Woman arrested in Boushehr for shunning the veil

The State Security Force identified and arrested a woman whose picture had been circulated on the internet showing her walking around in the city without wearing the veil.

The young woman was protesting the compulsory hijab in Iran. Security forces turned her in to the Moral Security Police in the port city of Bushehr, southern Iran.

The SSF Public Relations in Boushehr announced, “Following the dissemination of the photograph of an improperly veiled woman in one of the streets of Boushehr on the internet, please be informed that this lady lives in one of the city’s neighborhoods and suffers from mental disorder. She was guided by agents of the 11th district Police and turned in to the Moral Security Police.” (The state-run ROKNA news agency – July 14, 2017)