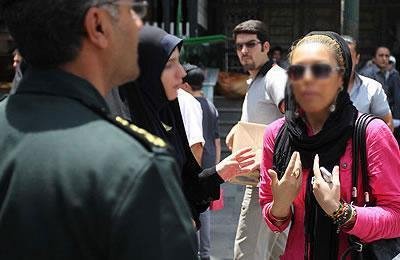 Groups have been formed in Hamedan to confront improperly veiled women. Hamedan Justice Department’s deputy for prevention said this in an interview.

Saeed Golestani said, “We have identified 17 groups formed by the public. We are encouraging formation of similar groups in the mosques in different neighborhoods in the province.”

Golestani reiterated that those who facilitate or promote dropping the veil, will be dealt with according to Article 638 of the Islamic Punishment Law.

As for the entertainment areas in Hamedan, Golestani said, “We would counter any local women who are improperly veiled.”

He also explained about the implementation of a bill passed by the Cultural Revolutionary Council on the need to observe the veil and chastity in government offices. He said, “We have used the capacity of the province’s General Department of Intelligence Security to give warnings to government employees, especially women, who are improperly veiled at the workplace. We asked them to give warnings in the first stage to those people who are improperly veiled at work or afterwards, and eventually deal with them according to the disciplinary rules.” (The state-run Tasnim news agency – July 15, 2017)