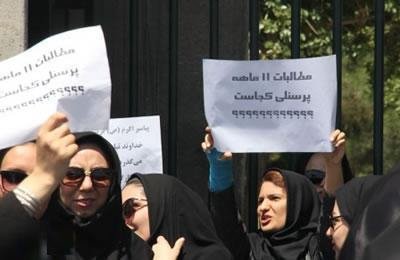 Women nurses staged a protest on two consecutive days on July 16 and 17, 2017, outside the Governor’s Office in Semnan (central north of Iran).

The nurses carried placards demanding to receive their payments past due for 11 months.

Another placard implied theft by government officials, citing the Prophet of Islam as saying, “The Al-Mighty God forgives all sins (with repentance) except when someone plunders a workers’ wage and does not reimburse it.”

One of the nurses who had participated in the protest said, “The money belonging to the hospital’s medical staff is used for construction. By this protest, we demand senior officials of the province to intervene in the case of non-payment of nurses’ salaries for several months.”

Iran: SSF cracks down on women in Boushehr’s beach