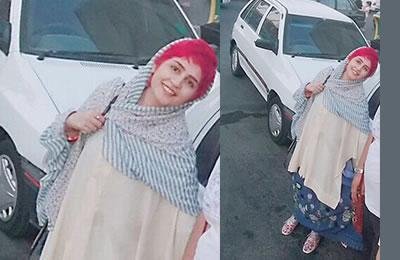 A young Iranian woman shared a post and a photo in the social networks, reporting that she had been arrested for wearing a blouse and skirt. In this illuminating post, she recounts what happened to her and other women arrested and detained for being improperly veiled. Following is the text of her post:

They told me it’s forbidden to wear a blouse and skirt.

It was the first time I was hearing something like this. I never thought the situation in the country was so bad that wearing a skirt could be counted as a crime.

And it was not just me. Everyone wearing short manteaux which was above the knees or was open in the front, and everyone wearing pants just 90-cms in length, were arrested. They were arresting people en masse. Then, when the van was filled, the captain said, ‘That’s enough. Let’s go!’

All the girls were weeping. They were so scared.

When we arrived at the police station, their treatment became really rough. They made threats to send some of us to (the infamous) Vozara (detention center).[1] They had us fill a questionaire and took our photos. Then they made us sign a pledge. And finally, they said (your families) should bring you clothes and covering. We can let you go only after we check and OK them.

I told the agent, “Although compulsory Hijab is wrong in the first place, what was wrong with my clothes? Is it a crime to wear a blouse and a skirt? Where is this written?”

He told me, “The color of your hair is like those who worship Satan. Your covering belongs to Israel. Then if you fall down and trip over, your skirt flies up. Then what are you going to do? You have ruined our lives!!”

I started laughing so hard that all the girls who were crying started to laugh loud, too. But I couldn’t resist. I had promised Tahoora (name of a person) that nothing would happen to me again.

We were humiliated so much. This wasn’t any feminist tweet or an argument over literature. This was the “reality” going on. The reality that showed the real society was something else.

There I learned that I must get out of the cyber space and all the hot talks in it. Education and protests must be taken to the streets. When security forces tell me that it is a crime to wear a blouse and skirt, I must not fear and I must punch them in the mouth. It’s time for everyone to take to the streets and demand that violence against women be stopped.

In the end, I have a question for Rouhani, Molaverdi[2] and other officials who speak of freedoms. Is it a national security crime to wear a blouse and a skirt?

[1] Vozara is the name of an infamous detention center located on a Tehran street with the same name, where women are taken to for improper veiling but are tranferred from there to other unknown locations to be tortured and sexually assaulted.

[2] Shahindokht Molaverdi is Rouhani’s deputy in women and family affairs.

Iran: Women make up 80% of victims of domestic violence