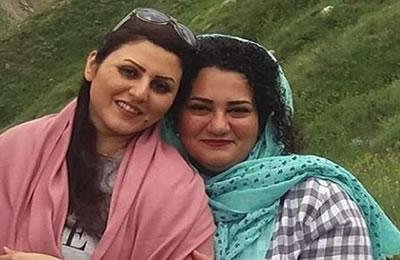 Political prisoners Atena Daemi and Golrokh Iraee wrote an open letter to the ambassadors of 45 foreign countries who went on a guided tour to Evin Prison on July 5, 2014.

Atena Daemi is serving a seven-year prison sentence solely for her peaceful human rights activities opposing the death penalty, participating in protests against executions, and sending information about abuses of political prisoners to human rights groups based outside Iran.

Golrokh Ebrahimi Iraee is sentenced to six years in prison for writing a fictional story about the cruel practice of stoning which has not been published, yet.

The text of their open letter follows:

We were informed that on July 5, 2017, a delegation of some 45 ambassadors residing in Tehran were invited to pay a visit to Evin Prison.  Ironically, this invitation was on behalf of the Iranian Prisons and the Islamic Human Rights organizations.

It is part of the Iranian tradition to ensure that your house is clean and presentable when you invite guests.  Hence, it was inevitable that the area across from the present office of Implementation of the Verdicts in Evin which used to be the place of the firing squads and executions of political prisoners in the 1980s would now be transformed into a reception area for 45 ambassadors.

We are addressing you, the honorable ambassadors who were invited to tour some selected parts of Evin Prison as the gentlemen wished.  All of us – you and us – know that it has been a long time that the Iranian regime and particularly the Prisons Organization have been sanctioned for flagrant violations of human rights.

For many years, the Iranian regime has refused to let in the United Nations’ Special Rapporteurs (Mr. Ahmad Shaheed and Ms. Asma Jahangir) to visit the prisons.  But now, you, the ambassadors residing in Tehran, want it or not, have become mouth pieces for the Iranian regime, helping them to invert the truth about the situation of human rights in Iran.

Do you know how many wards and detention centers are there in Evin Prison?

Did you see the windowless cells which lack any ventilation and lavatory, and are used for solitary confinement?

Did you see the small rooms and dingy dungeons used for interrogation?

Did they show you the notorious cells known as “the grave”?

What about the covered “fresh-air” yards and the blindfolds and handcuffs?

According to the Iranian newspapers, you were stunned by the great conditions of both the prisoners and the whole prison atmosphere. How many prisoners did you talk to?

Were you informed of the number of detainees, the length of solitary confinement, the methods of interrogation, or the various physical and psychological tortures?

Indeed, why weren’t you brought to the only political women’s ward of Evin, where we are currently imprisoned.  Probably, you were told that Evin has no women’s ward. A lie as big as the other one when they said there were no political prisoners in Iran.

We know that you could not and will not be able to do so because they did not and do not want you to find access to the files of even a few of the prisoners and find out about the depth of the tragedy.

So, we are going to write about the same area that stunned you so much.

Did they tell you how and who renovated Ward 4 where you visited? You need to know that the same prisoners who paid millions for the renovation expenses of that ward were taken away on the day of your visit. Pretending to take the prisoners for trial or hospital visits, they took them to Ward 2A and kept them there until you left the prison’s premises, so neither of you could see one another.

Did they mention that prisoners held on financial charges and political prisoners are held in Ward 4 along with all kinds of ordinary criminals?

The day before your visit to Evin, they stopped allowing newspapers into the prison because they did not want us to learn of the visit, fearing that somehow the truth would come to light.

You made comments about the prison’s hygiene, so let us tell you about the hygiene in the Women’s Ward of Evin, about the clinic’s conditions and wrong prescriptions, about the lack of detergents and disinfectants justified by sanctions and budget deficits.

Did you hear about the number of prisoners with HIV or hepatitis who are detained in the same place with other inmates?

Did they tell you that due to religious restrictions on female prisoners being seen by male doctors, the women imprisoned in Evin do not receive injections or ECGs? Did they mention that there is not even a single female nurse who could carry out these tasks for us?

Were you informed of the thousands of prisoners who suffer from kidney problems due to the prison’s unclean drinking water?

Did they introduce you to a doctor known by the name of Shahriari?  A physician who makes his diagnoses without examining the patient and only by looking at her; the one whose prescriptions do not bear his stamp fearing the consequences of his wrong or bad diagnoses.

We wish you could have ridden the ambulances and seen first-hand the absence of the necessary equipment.

We wish you had asked your hosts to show the footages recorded by the prison’s cameras two days before your visit so you could see the unsanitary conditions of the prison, and the prisoners’ uniforms which are yellow for inside the prison and striped blue for outside.

We wish you could see the series of doors which are locked and sealed on prisoners one after the other – and even on prison guards in every shift– to find out how long one has to wait for the doors to be unlocked during an emergency exit for the transfer of a sick prisoner in emergency conditions to a hospital.

Let us give you an example from the Women’s Ward of Evin Prison, where the emergency exit passes through three locked doors. You can calculate the amount of time needed to open each door after calling and coordinating for the soldiers to come and unlock the doors.

Only if you could see the number of women who must squeeze to sleep on the floor of the hall since there are no beds.

Only if you could taste the food that’s distributed to prisoners.

Did you know that prisoners have to buy at their own expense their needed dairy products, vegetables, fruits, and protein at rocket high prices from the prison’s store? Because the small amount of the food distributed in prison on a monthly basis, is rotten and expired. We wish they had explained to you about the millions (of toumans) of monthly profit they make through this business.

Nevertheless, they should have informed you that just one day prior to your visit to Iran’s largest prison, there were no vehicles there because the drivers of the taxis designated for the transfer of prisoners to medical centers and courts were on strike and did not come to work to protest having not received their salaries for several months.

Were you advised of the existence of deserted wards such as Ward 350 (men’s political unit) or the clergy’s ward?

We find it critical that you know that contrary to the claims of the director of the Prisons Organization (Mustafa Mohebbi), we can be visited by our families only once a month and not every week.

You could have easily learned of Evin’s geography through satellite images.  You could have read various reports by reliable sources about the wards in Evin and other Iranian prisons. You could have even named some political prisoners and asked to meet them. You could have entered and inspected this prison with prior knowledge.

Although none of these steps were taken, we would like to urge the honorable ambassadors to at least refrain from taking part in false reporting on conditions of Evin and its prisoners.  Instead, you can pay unexpected visits to Evin, Qarchak, Fashafooyeh, Rajai Shahr and other prisons in Tehran and other cities to get a more realistic picture.

Countless political prisoners have been incarcerated because we wanted to provide a real picture of the human rights situation in the Islamic Republic of Iran.  We have paid high prices for this cause, our families have been continuously harassed, and yet we are concealed from you.

We, who hoped to bring about small improvement in prison conditions and conditions of the prisoners, are now in jail. You, honorable ambassadors, have delayed the realization of our demands because your presence in Iran’s biggest prison was used to print big headlines: “Some countries and their media show a false and inaccurate image of Iranian prisons.”  They invited you to take advantage of you and through stage-managing and deceit, refute the reports of international human rights organizations as baseless and unfounded.

While you could and you can help improve the conditions by presenting a real image, not a theatrical and symbolic one, of the Iranian prisons.

We, the signatories of this letter, urge you to demand that the Iranian Prisons Organization and the Islamic Human Rights Institute allow the UN Special Rapporteur, Ms. Asma Jahangir, to come to Iran, inspect the prisons and visit political prisoners and social activists.