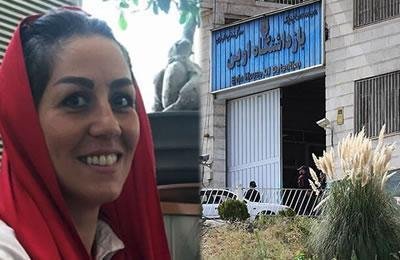 Maryam Akbari Monfared, a political prisoner detained in the Women’s Ward of Evin Prison, addressed a letter to the ambassadors who recently visited Evin prison. She wrote about issues that had been concealed by the Iranian regime’s authorities during their visit.

Maryam Akbari Monfared was arrested in December 2009. She was condemned to 15 years of prison on May 11, 2010. This political prisoner was charged with Moharebeh (waging war on God) for membership in the PMOI, a charge that she has denied. She has lost four siblings in the executions of the 1980s and the massacre of political prisoners in 1988. Her court judge told her that she is paying the price of her sister and brothers.

Ms. Akbari Monfared, now in her eighth year of imprisonment, has been detained in several prisons, including Shahr-e Ray, Gohardasht and Evin. In her letter she wrote about women’s conditions in Iranian jails. Following is the full text of her letter:

To the honorable ambassadors Mr. Dian Wirengjuri of Indonesia, Mr. Mário Fernando Damas Nunes of Portugal, and others,

For all those whose hearts are beating for human beings and humanity, for values that go beyond geographical boundaries.

I am writing as a witness to the endless and dreadful days of Shahr-e Ray, Gohardasht and Evin (prisons)… Dark silos with high ceilings, no windows or any opening for natural sunlight, each filled with the smoke of cigarettes and the hubbub of 200 detainees which drive everyone insane. I saw with my own eyes the regression of human beings and humanity.

I have witnessed stormy moments.

I saw the eyes of prisoners filled with rage as Special Guards struck their batons on the frail and feeble bodies of women and girls.

I have witnessed fights over bread and food in the dining hall, which prisoners have renamed the “beating hall.” The ration of food given to prisoners was so small that hungry inmates collected residues in dishes and crumbs fallen on the ground. A few moments later, you could hear the trays and chairs being thrown around in a fight over the crumbs left on the dirty and contaminated floor of the dining hall where several people fainted every day.

I have seen beautiful girls who became victims of the trumped-up charge of having illicit relationships.

I have seen how women and girls were mired in miseries they could do nothing about, willing to do anything the prison guards wanted them to, just to get 15 minutes of telephone time or a few days of furlough.

I have seen the oppression women and girls went through, in their beautiful faces. Those who had repeatedly felt the weight of a hanging noose around their necks. Women and girls who have been waiting long years on the death row. Can you imagine what it feels like to anticipate your imminent death every day?

I am writing as a witness.

I have witnessed extensive efforts made to invert the truth and refute the news and reports published on the internet about the gross violations of human rights in Iranian prisons.

A large number of prisoners were transferred to the security wards of Evin Prison and other locations while the honorable ambassadors came to Evin Prison on July 5, 2017. This is itself a strong proof of the deplorable conditions in Iranian prisons.

Honorable ambassadors, you were surprised by what you saw, but what you saw was a Potemkin Village set up by the clerical regime.

The moment I saw the picture of your meeting in the newspapers, I wished the tall, lush trees that had spread their shade to protect you for the hours you held talks, could speak out. I wished those trees would tell you of the scenes they have witnessed since they were just saplings.

In Shahr-e Ray Prison, I saw death-row prisoners desperately begging their families to talk their judges into implementing their death sentences sooner, as they didn’t want to stay alive in prison as the walls get taller and the bars become tighter with every passing day…

As someone who is serving the eighth year of her sentence, I have seen my fellow inmates every day and every moment, as their health deteriorated. I’d like to make special reference to Mrs. Mahvash Shahriari, who is serving her tenth year. There were others who are presently out of prison, including Mrs. Kobra Banazadeh, Nahid Malek Mohammadi, Motahareh Bahrami, etc.

I have been held behind bars under inhuman conditions.

Mr. Mohebbi, Director General of Iran’s Prisons Organization, said that they had undertaken numerous measures in prisons to teach skills, educate and train inmates, fill their free time and make use of their term in prison to teach them skills such as making mosaic, hairstyling, etc.

The question is, while the most basic human rights of inmates are not respected, what’s the use of learning hairstyling and mosaic art?

Mr. Mohebbi said that inmates are busy working in sewing and carpentry workshops, with 50 percent of their income given to their families, 25 percent given to them during their prison term, and the remaining 25 percent paid upon their release from prison. Did Mr. Mohebbi say anything about how much the inmates earn?

He said that prisoners study and complete their education at different educational levels while they are serving their sentences. As if, “Evin is not a detention center but a university!”

Are all these things happening under the sky of prisons across the country? The paradise of Evin and other prisons. . . It is truly amazing. Then, where on earth are the prisons that I have seen?

You mentioned the teachings of the Quran. For your information, the prisoners are forced to memorize the verses of the Quran. They perform religious rituals to gain better prison conditions or to earn a few days of leave or to be spared the hanging noose. They do not care for the spiritual meaning.

Mr. Gharibabadi, the deputy for international affairs at the Human Rights Staff, said that some countries and media show a false and inaccurate image of Iranian prisons! If this is the case and if there are such excellent conditions in your prisons, why is it that Mr. Ahmad Shahid, the (former) Special Rapporteur on Human Rights in Iran, and Ms. Asma Jahangir, the current one, have never been allowed to visit Iran, let alone visiting the prisons?

Mr. Gharibabadi has also spoken of the “valuable” health services offered in prisons. Was it not in these very prisons that Mr. Mohsen Dokmechi became ill in the absence of medical treatment and subsequently lost his life due to illness? Was it not Mr. Hoda Saber in this very Evin Prison who lost his life because of delay in his transfer to a medical center?

At this moment as I am writing this letter, my fellow ward mate, Azita Rafizadeh, is suffering from a broken finger. She has a 6-year-old son, Bashir, and her husband, Peyman Kooshak-Baghi, is also imprisoned in Gohardasht Prison. Her finger got fractured at two points on July 6, 2017. However, up to this date, which is the third day following the accident, no authorization has been issued for sending her to a hospital to receive medical treatment.

Yes, I’ve been witnessing moments and conditions that my pen is incapable of describing.

I decided to step in freedom path and while passing this route, I’ve become injured with harassments. Exile, transfers, and prohibitions have become part of my life. I’ve witnessed the deserts of Gohardasht and Evin prisons, where even plants fail to grow; gradual-death camps, not places to serve your prison term.

I can still hear the sound of human dignity being crushed.

What I saw or heard was obscenity and atrocity. I stretch my tied hands to you so that once again you would give me a hand to uncover the truth… I once again convey the sound of pains and sufferings to you so that you can reflect my voice…