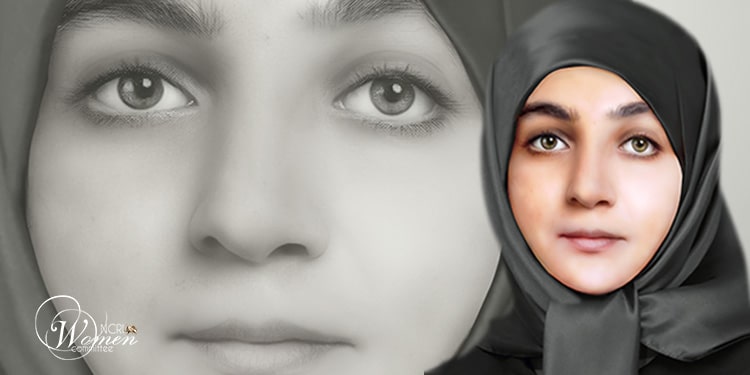 Nahid Tahsili paid the price to defend her political identity

Nahid Tahsili paid the price to defend her political identity.

Tahsili family’s picture is right in front of me.  The pictures of each of the four family members are in tiny frames on the necklace of their mother; Fahimeh, Hossein, Hamid, and Nahid Tahsili.

I knew Nahid.  She had graduated with a diploma in math and was 19 at the time of the arrest.  Now, after all these years, I kiss her gazing eyes.  I was with her in Ghezel Hessar Prison’s 8th ward, then at Evin and Gohardasht for some time, up until the massacre in 1988.

Nahid Tahsili was reserved. She barely spoke, but I was always looking forward to listening to her.  Her solemnity and firmness attracted everyone.

She was severely tortured during interrogation. Her feet were blistered, bruised, and wrinkled from the cable beatings.  Her kidneys had failed under torture, and for a very long time, she was using dialysis.  She had to undergo leg surgeries.  A part of her leg skin was transplanted onto the bottom of her feet.  Nevertheless, they could not still cover the holes that the cables had caused on her feet, and she was constantly suffering from the pain.

Nahid’s patient face reflected her unspoken words.  She talked to me about her family.

Her sister, Fahimeh, a medical student at the University of Tehran, was executed in 1981, a month after her arrest, only for providing medical assistance to the PMOI.  Her brother, Hossein, was also executed by firing squads in the same year.  And now Nahid and Hamid, an engineering student at the Sharif University of Technology, were sentenced to 10 years in prison.

In 1983, Haaj Davoud and Lajevardi, the hangman, launched the “cage and resurrection” torture center.  They transferred anyone whose presence they believed to be a threat, in other words inspiring for other prisoners, to this new place of torture.

Nahid, whose high spirit and leadership inspired other prisoners and me in ward 8, was transferred to the cage.  She courageously endured seven months in the cage.  When she returned to the ward, she told us that she was not even allowed to cough or make the slightest movement as she was blindfolded and forced to sit facing a wall, hugging in her knees. The torturers had let the prisoners know that they would be tortured so much until their so-called “resurrection” would become a reality.

According to the verdict issued for Nahid in 1984, she should have been set free by 1986.  When her sentence came to an end, she was told that they would release her under one condition, which was to announce her remorse for supporting the PMOI and her past activities on national television.  Nahid rejected the offer.  A few days later, she was urged to write a letter to repent, but she refused once again.  She was asked a third time to vow that she will no longer be involved in political activities.  Nahid, however, denied all these conditions and did not give up her civil and legal rights against the misogynist mullahs.

In 1986, Nahid and I were inmates.  They summoned a mother by the name of Fereshteh to the office to tell her that she is going to be freed.  Nahid called me and said, “let’s finish this embroidery quickly so that Fereshteh can take it with her as a souvenir when she’s released.”

The embroidery was a blooming tree and a poem.  We all gathered around. Two people sewed, and two others provided the thread.  We finished the embroidery in a short time and hid it in Fereshteh’s belongings.

Nahid Tahsili paid the price to defend her political identity

From 1986 to 1988, no day went by without suppression and beatings, and Nahid’s resilience and resistance always inspired me during the guards’ invasion.  She never compromised with them.

In the spring of 1988, Nahid Tahsili called on everyone to defend their political identity against the regime and pay whatever the cost came to.

They asked her to deny her political identity in court, but she said no to the “Death Commission” and called herself a Mojahed while declaring her ideology as that of the PMOI.  She was taken straight to the gallows.  Nahid Tahsili, along with her brother, Hamid, were executed during the 1988 massacre.

Their mother, who was wearing the photo frames of Fahimeh and Hossein, added two more pictures to her necklace.

The embroidery that Nahid made was taken by Fereshteh and given to the Iranian Resistance and for a long time was displayed in Camp Ashraf’s museum.

Nahid used to tell anyone who was released from prison, “should you make it safe across this frightening desert, send our regards to the blossoms and rain.”

Iran: Patrols started their work in Qom to suppress women