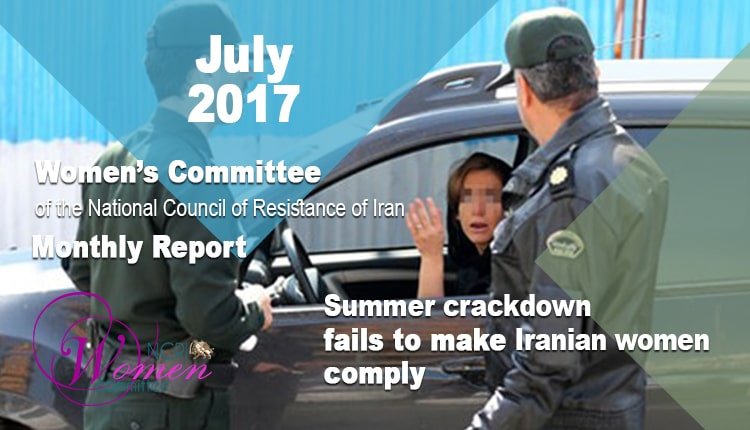 As the fate of the clerical regime in Iran is tied to the veil (Hijab) of women, every summer they feel threatened by this force for change.

This summer, too, the regime has geared up to control a situation which is increasingly getting out of hand with Iranian women undertaking bold actions to defy the state-sponsored compulsion of veil against their free will.

The month of July saw the regime’s rank and file mobilizing to confront women’s common practice of dropping their veils in their cars, while others dare to swim in the beach and even walk out in the streets without covering up.

Preparations for the summer crackdown started in June when the Interior Ministry issued a directive to the Provincial Governors, giving them a calendar for inspection and evaluation of women’s observance of the rules on compulsory Hijab in government and private entities including hospitals, universities, offices, banks, etc. beginning on July 1.

The directive was ensued by a blitz of announcements and declarations by religious scholars and a plethora of military and state officials threatening women with “harsh” treatment if they flout the rules on Hijab.

Movahhedi Kermani, Tehran’s Friday Prayer leader, dedicated one of his Friday sermons to prove that it is religiously unlawful to drop one’s veil while travelling by car and women who do so must be punished. “Inside one’s car is not a private space; it is a public space and if an improperly veiled or –God forbid an unveiled woman— were inside, it would hurt the public atmosphere. Therefore, the State Security Force must deal with these people, decisively.”

Kermani went on to conclude that women’s covering up in veil is tied to the regime’s political and security interests. “The issue of Hijab is a very crucial issue tied to our religion, politics and independence. When the world sees that the veil (Hijab) is observed in Iran, they conclude that they cannot harm this people and country… But, if God Forbid, they see that people go around without the Hijab, or if there is a situation in a car similar to dropping the veil, the conclusion would be different.” (The state-run ISNA news agency – July 14, 2017)

In another instance, Khamenei’s representative in Mashhad, mullah Alam-ol Hoda, tied the regime’s economic crises to women’s failure to observe the Hijab.

In a video clip distributed on the internet on July 7, 2017, Alam-ol Hoda asserted, “Our economy has been hurt by women and girls who wear leggings!… Careless women who do not fear (the law) and drop their veils, these fearless women have created problems for our economy!”

Bashir Khaleghi, secretary of the parliamentary Health Commission, said hospitals must have stricter rules on the veiling (Hijab) of nurses. “Unfortunately in some hospitals we encounter nurses and other personnel who have mistaken the medical environment with a fashion show.”  (The state-run Fanous News Agency – July 23, 2017)

Seyyed Massoud Jazayeri, senior spokesman of the Armed Forces, announced that the authorities have no doubts about the need to observe the veil inside the cars. He added, “Defying the Islamic veil and promoting promiscuity are among the priorities of the enemy’s soft war… The State Security Force ought to undertake maximum efforts to fulfill its duty in enforcing the veil and chastity.” (The state-run Khabar Online website – July 18, 2017)

The Prosecutor of Mazandaran Province had declared that the Judiciary files cases against women who drop their veils in their vehicles, and they will have to stand trial by the Judiciary.

Commander of the State Security Force in Isfahan, Abdolreza Aghakhani, declared that “20 Guidance Patrol teams have been organized to patrol the city day and night. They will deal with the cars that have tinted shields.” He said the SSF ought to be able to detect inside the cars from a 3-meter distance. Since March 2017, the SSF has “enforced the law” against 25,000 cars with tinted window shields. (The state-run ISNA news agency and Asr-e-Iran website – July 19, 2017)

Jaafari, the Public and Revolutionary Prosecutor of Mazandaran’s capital announced that the Judiciary will tackle, seriously and legally, the problem of women dropping their veils. He said, “Any personal or public vehicle, motorcycle, motor boat, jet ski and other motor vehicles that are used by unveiled women will also be impounded.” (The Judiciary’s state-run Mizan news website – June 27, 2017)

Mehdi Kaheh, the Public and Revolutionary Prosecutor of Qom announced on July 7, 2017, that the plan to oversee “chastity and hijab (veil)” would be stepped up with the help of the Bassij and the State Security Force in Qom. (The state-run ISNA news agency, July 7, 2017)

At the same time, Bassij and State Security Force motorist patrols tasked with the suppression of women on the streets started their job in Qom.

Hamidreza Khezri Tangestani, Commander of the State Security Force in Boushehr (southern Iran), declared, “In light of the rising heat in Boushehr where more and more people like to go swimming in the beaches, there are people who make a mockery of the culture of Hijab and Chastity… The SSF will be decisive in dealing with those who breach the norms.” (The state-run Tabnak website, July 17, 2017)

The SSF in Boushehr fenced up the area and set up billboards along the beach, prohibiting presence of women.

Yet, in an open acknowledgement of forming and backing vigilante groups to confront women in the streets, Saeed Golestani, the Justice Department’s deputy for prevention in Hamedan (western Iran) admitted identifying “17 groups formed by the public,” adding, “We are encouraging formation of similar groups in the mosques in different neighborhoods in the province.”

He also acknowledged that they had beseeched the General Department of Intelligence Security to implement a bill passed by the Cultural Revolutionary Council in government offices. Golestani said they would be helping the Justice Department by giving warnings to female government employees who are improperly veiled at the workplace. “We asked them to give warnings in the first stage to those people who are improperly veiled at work or afterwards, and eventually deal with them according to the disciplinary rules.” (The state-run Tasnim news agency – July 15, 2017)

As it can be construed from the announcements, threats, warnings, and measures undertaken, the problem the regime is currently dealing with is not improper veiling, but the dropping of the veil.

The regime has become so sensitive in this matter, that they could not even tolerate women who were wearing long skirt instead of the chador (the officially recommended head-to-toe black veil).

The dropping of the veil has become common practice to the extent that the regime’s religious scholars had to come to the stage to issue religious edicts. The Armed Forces spokesman and State Security Force commanders, Judiciary officials, security and intelligence officials, government ministries and parliamentary deputies all have collaborated to create the atmosphere needed by the regime’s forces to act. They even threatened to put women on trial for flouting the rules on Hijab.

Obviously, the threat to put women on trial is a clear effort to terrorize women and make them back down in their struggle to push back the official policy of compulsory Hijab.

Nevertheless, the state-run press published the pictures of a defiant woman bravely walking around the city of Boushehr with just a T-shirt and tight knee-length pants. The woman was later identified and arrested by the SSF and declared “insane” to prevent other women from following suit.

Iran: Rouhani’s exclusion of women as seen by the press