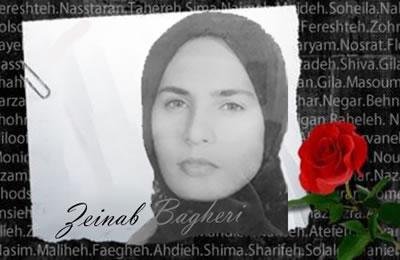 Zeinab Bagheri: Victim of the 1988 massacre in Ahwaz

Zeinab Bagheri and Parvin Bagheri, along with Nadereh Rezaii, Nahid Kaikavousi, Zahra Mirzaei, Monireh Moradi, Zahra Afri, Sakineh Delfi, Sakineh Ghaderi, and Fatemeh Hajian were sent before the firing squads in 1988 in Ahwaz, capital of the oil-rich Province of Khuzistan, in southwestern Iran.

Once after her family visit, she walked in with her beautiful smile and said, “Hey, you guys! My family has been told to deposit some document and gain my freedom!”

Everyone was so happy. We hugged her. There was a hubbub in the ward and everyone wanted to make some gift for her with the very primitive things we had at hand.

The next week, Zeinab bid farewell, gave her belongings to other prisoners and left.

We were still dealing with the feeling of missing her, when we saw her walk back, very angry and sad.

“What’s going on? Why have you come back?”

“Nothing! They said my freedom has been postponed for the time being.”

Everyone was so upset.

Zeinab remained in prison and two months later, she was sent before the firing squad.