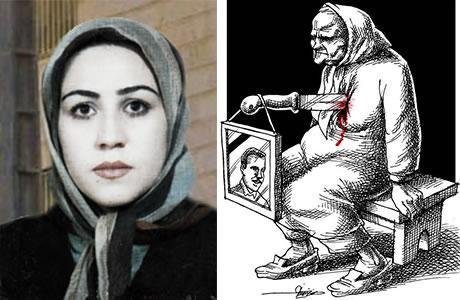 Sufferings of Mothers of PMOI Martyrs

We have already spoken of the magnificent stories of those fallen for freedom. We have written many poems and songs about the most splendid epics created in the Iranian people’s quest for freedom.

Our hearts are filled with love and faith when we hail the lofty souls of those heroes in chains and those who sealed their honesty and loyalty with ultimate sacrifice.

I am writing for the mothers and fathers whose strength and resistance make mountains humble. I am writing to pay tribute to their humane interpretation of the word, “mother”, and to thank their abundant love which never dies down and their endurance that passes like a breeze through the stormy sky.

I turn the pages of my memoirs, to reach the page where I first found your familiar gaze. I could see the glad tidings of life in your kind eyes as if a dandelion was passing through the experience of life with a cry for justice.

In the noisy days when the POWs were returning home, we had decorated our neighborhood with strings of light to celebrate the return of Reza, our next door neighbor, Mrs. Zahra’s son.

On that same day, my mother had gone to Behesht-e Zahra (cemetery). She returned home at around noon. I remember the exact moment. My mother hugged Reza, squeezed him hard and kissed him on the cheeks, as if she was kissing her beloved son, Abdolreza, who had been executed earlier. All day long, you were deep in your own thoughts, and your eyes bespoke of the lashes of injustice.

My eyes followed you, step by step, cuddling your tall figure. You had been through so many twists and turns, so many ups and downs, you had witnessed so much atrocity, so much injustice, and you were still standing tall.

I can remember your words on that day. “I wish I could also celebrate the return of my loved ones; although I didn’t see even their corpses, nor did I have the permission to mourn them.”

Yes, in the days when people were tossing flower petals in the streets of Iran and decorating all neighborhoods with string lights for the return of POWs, and everyone was engulfed in joy and happiness, there were also some mothers who were mourning their children and their beloved young men and women who had been executed. No one knew what was going on in the hearts of those mothers.

The lullabies of these mothers became an anthem for freedom so that the Divine rule of God would shine on the Earth and give meaning to the world with His love and mercy.

The children of these dear mothers and fathers who were sacrificed on the altar, turned into inspirations and symbols of sacrifice, steadfastness and courage.

My parents were only an example of many other parents who had been born human in the darkness of a land where their ancestors had been unjustly hanged by the rope of the scale of justice; they were the ones who ran like blood in the veins of the history of our homeland.

These were the fathers and mothers who wrote the pages of victory in their own time in the silence of an everlasting love.

Mother is the symbol of love, sacrifice and selflessness. There were mothers who sacrificed their loved ones but their love and kindness became ubiquitous, a love that could not be written on the paper.

I would like to remember mothers who stood tall as a loud cry against everything that sought to enchain them; they wiped the dust away from their faces to identify the executioners who killed their children. The executioners could not ever conceive of such steadfastness and endurance. These mothers stood firm to expose the oppression of the mullahs’ rule all over the world and attest to the undoubtable truth.

This is the story of how we were united as humans to watch the rainbow in spring, to feel the pride of mountains and the glory of the sea.

In those years, when our mothers were suffering in agony, their eyes were filled with kindness and their silence was a cry which called on the world for solidarity.

Since then until now, I have been turning the pages of my memoirs in anticipation of this moment when the truth of the resistance of these mothers and fathers is narrated, those who did not fear the cold and dark days of oppression, and their strength overwhelms us.

They were the ones who continued the movement for freedom and equality in Iran. They have been the hope of our nation. The philosophy of their lives and deaths, gave meaning to Iran’s history. They became beacons who show the way towards freedom and a principled life.

Your cries will not go unanswered. Our call for justice today, is the answer to your cries. There will come a day when we can feel the warmth of the sun of love, hope and justice; a day when prison, torture, and execution will become a fable and a day when Iran will feel your presence.

Iran: 25% of imprisoned women are detained on drug-related charges