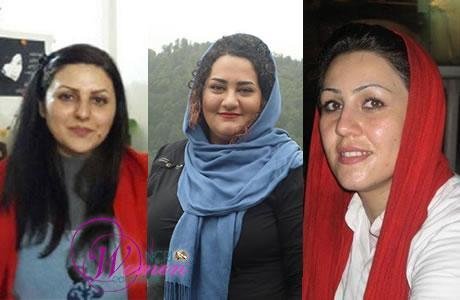 Atena Daemi, Golrokh Ebrahimi Iraee and Maryam Akbari Monfared, detained in the women’s ward of Evin Prison, published an open letter on August 19, 2017, calling on conscientious people to speak out against the difficult conditions of political prisoners in Gohardasht Prison who are on the 20th day of their hunger strike in protest to the extremely repressive conditions in that prison.

In their letter, Atena Daemi, Golrokh Iraee and Maryam Akbari Monfared have emphasized, “Those who are critical of the government –for whatever reason– must not face such harsh reactions placing them under inhumane conditions in prison. Under the clerical regime, many people have been killed unjustly, countless rights trampled, and many unjust rulings issued. Hunger strike has remained as the only way for prisoners to demand justice.”

The political prisoners of the women’s ward of Evin also wrote in their letter, “While supporting the prisoners who are on hunger strike, we call on all international human rights organizations, the UN High Commissioner (for Human Rights) and the Special Rapporteur for Human Rights in Iran, Ms. Asma Jahangir, to undertake urgent action to save the lives of Gohardasht prisoners, especially those on hunger strike. Your silence and inaction will end up turning into a political cover for continued and widespread violations of human rights in Iran.”