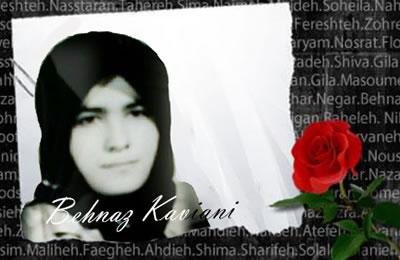 After the anti-monarchic revolution in February 1979, she became acquainted with the People’s Mojahedin Organization of Iran (PMOI/MEK) and began her activities in support of the opposition PMOI/MEK at the age of 13, at her school in Rasht.

In May 1981, when she was only 15, she got arrested by government-backed club wielders and was imprisoned for eight months for supporting the opposition PMOI/MEK.

After being released from prison, Behnaz stepped up her activities against restriction and suppression of freedoms until March 1982, when she was arrested again. This time she was incarcerated for one year.

Despite massive arrests and executions of PMOI/MEK supporters after June 20, 1981, Behnaz gained further strength from her second imprisonment and became more determined than ever to fight against the oppressive rulers. She understood that to gain freedom for her people and country, there is a price which under the clerical regime must be paid with imprisonment.

When she was released from prison in March 1983, she continued her activities in support of the PMOI/MEK and the Iranian Resistance. In 1985, she managed to find a way to leave the country to join the PMOI/MEK. However, she was arrested on the way in Tabriz.

This time, she was taken under vicious torture where she put up a staunch resistance. In summer 1988, when she was 22 years old, Behnaz gave her final “NO” to the Death Commission. In a summary trial, when she was demanded to renounce the PMOI/MEK and their ideals, she proudly asserted, “I am a Mojahedin woman.”