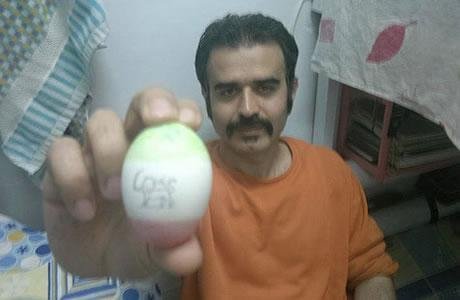 Ms. Zahra Eghdami, the 60-year-old mother of political prisoner Jafar Eghdami, a political prisoner who is presently on hunger strike in Gohardasht Prison in Iran, said that her son was in unsuitable condition when she last visited him and that he could barely stand on his feet.

“No one gives us any answer,” she said.

“All the families are concerned about the health of these prisoners. My son was given ten years of prison for no reason and he was just serving his time. But they (prison officials) forcibly displaced them, took away their belongings, banned them from family visits and keep harassing them every day. So the prisoners have no way but to put their lives in danger.”

Jafar Eghdami was arrested in 2008 after participating in a ceremony marking the anniversary of the massacre of political prisoners in 1988. He is now serving the last year of his 10-year prison term.

More than 20 political prisoners have been on hunger strike since July 30, after the warden of Gohardasht Prison, in Karaj, attacked Hall 12 of Ward 4 and beat up the inmates. Prison guards took away all their belongings and subsequently transferred them to Hall 10 which is strictly controlled with dozens of closed circuit cameras round the clock.