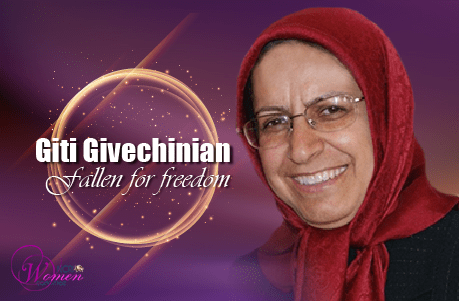 Education: Bachelors of Science in Psychology

Giti Givechinian was born in a wealthy family in Tehran. Giti completed her high school education in Tehran, always being among the best and brightest students. She was always regarded as being kind, happy, intelligent and courageous in the family and among friends.

Shortly after high school, she passed the university entrance exam and received admission from five universities. She chose to attend Tehran University, where she majored in psychology and completed her undergraduate studies.

Giti was a passionate student eager to learn. She was also an outgoing and sociable person, fond of sports and hiking. She was very popular among her friends.

Giti lived a simple life despite being well-off. Instead, she empathized with people around her. She was never indifferent to social issues and regularly participated in gatherings and marches against injustice and this was where she got acquainted with the opposition People’s Mojahedin Organization of Iran (PMOI/MEK).

Giti began her political life and her fight for freedom, with the PMOI shortly after the 1979 revolution. She actively exposed the fundamentalist and backward nature of the new dictatorship. Attacks of the regime’s plainclothes agents and hooligans could never force Giti to back down from her ideal.

After the June 20, 1981 uprising, Giti had to live a clandestine life because she was being pursued by the regime and many of her friends had been executed. She left Iran in 1982 and joined the ranks of the Resistance abroad.

Giti was serious and hard-working. She undertook demanding tasks, overcame obstacles and resolved any problem. She was among the first women who joined the National Liberation Army of Iran which was formed in 1987 and engaged in military units.

Giti was among those women whose determination, competence and self-confidence shattered the stereotype which portrayed women as being weak.

During the 14 years of PMOI’s steadfast resistance at camps Ashraf and Liberty under an inhuman siege, deadly military attacks, and psychological torture, Giti repeatedly proved her competence in handling difficult situations with dedication and devotion and served in one of the most sensitive positions in the leadership of the PMOI.

Giti was brutally murdered on September 1, 2013, when the special forces of the Iraqi Prime Minister Maliki raided Ashraf at the behest of the Iranian regime, to massacre its 100 unarmed and defenseless residents. Nevertheless, her courageous and calculated confrontation with the assailants saved the lives of half of the residents.

Giti gave her life as a heroine, becoming a model for many women in the resistance who will continue her path to emancipation, liberty and freedom.