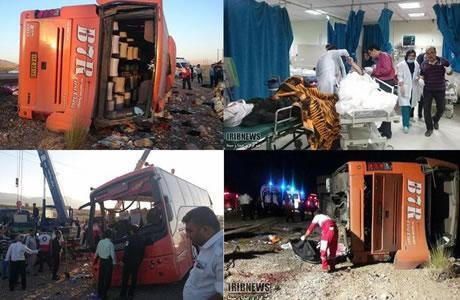 Iran: 44 young women get killed or wounded in bus accident

The bus carrying some of Iran’s talented and elite students overturned in Hormuzgan (southern Iran), leaving 44 young women dead or wounded. The accident took place at around 4 a.m. on Friday, September 1, 2017.

The deputy operations officer of Iran’s Emergencies Organization has confirmed the deaths of 11 young women and injury of 33.  Thirteen girls have been reported to be in critical conditions.

Hassan Noori said four young women suffered amputated limbs or spinal cord injuries. Three of the critically wounded have been transferred to a hospital in Shiraz.

On the cause of the accident, the state-run press has reported the bus driver as being drowsy. (The state-run ISNA news agency, September 1, 2017)

This is not the first time that large groups of young people get killed in bus accidents. In a similar accident on March 17, 1997, the bus carrying students of Tehran’s Sharif Industrial University was driven into a gorge, killing seven students and two members of the university’s faculty of staff. Maryam Mirzakhani, a world math genius, survived this deadly accident.