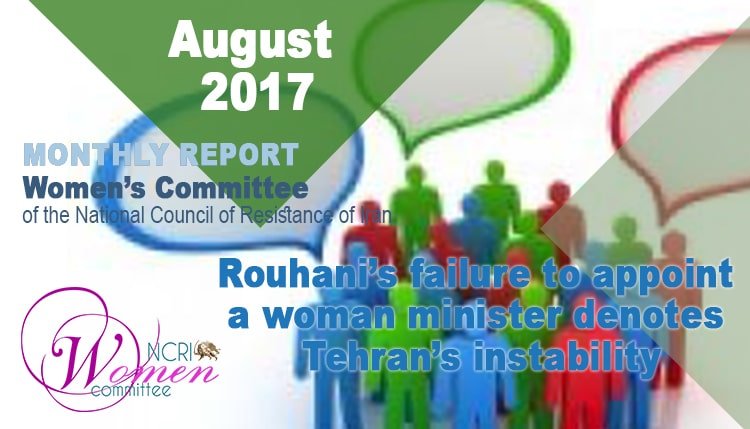 Rouhani’s new all-male cabinet was approved by the mullahs’ parliament or Majlis on August 20, 2017, providing further proof that not only he is not a moderate, but he is a demagogue and a charlatan who falsely promised to improve civil liberties including women’s rights, in his election campaign to win reelection.

Rouhani had claimed that his administration “does not accept gender discrimination and injustice.” He also promised to appoint at least one woman to his Cabinet. But when the day came, it was announced that Rouhani’s staff had not been able to come up with a list of qualified women.

The CNN reported: Iran’s newly re-elected President has not included any women in his proposed list of 17 ministers, according to Iranian state media, reneging on an election pledge to his largely reformist base… The exclusion of women from the proposed list was widely expected, though appointing a female minister was a central promise made by Rouhani during the election campaign.

The Al-Monitor wrote: The Reformists expected Rouhani to appoint at least one woman as a minister — an expectation that has not been realized.

Reuters wrote: Iranian president Hassan Rouhani appointed two women vice-presidents on Wednesday, but made no changes to an all-male list of cabinet ministers criticized by reformists for its lack of female representation.

In reaction to criticisms regarding lack of female ministers in the new Cabinet, the government spokesman Mohammad Bagher Nobakht said, “Women will still play a significant role. It’s an injustice to women to think that they should only be used to fill ministerial roles.”

By “still play(ing) a significant role”, Nobakht was referring to the appointment of merely three women, two appointed as deputies and one appointed as advisor to Rouhani. Unfortunately, the Western press play into the hands of Tehran’s charlatans by wrongly translating these positions as “Vice-President.”

In any government, Vice-President is usually referred to someone who is the right-hand assistant to the President and enjoys the powers to act in his stead or replace him should the circumstances call for.

Far from being Vice-Presidents, these women do not even have the powers to fulfill their own duties. A case in point was the situation of Shahindokht Molaverdi, who served as head of the presidential directorate for women and family affairs, during Rouhani’s first term. She had repeatedly admitted that she does not enjoy any executive powers to advance her directorate’s own projects. Whenever she attempted to take any superficial step in women’s favor that Rouhani’s government badly needed in its foreign relations, she had to back down under pressure.

In an interview which was published by the Tnews.ir, on August 24, 2015, revealed that “since we do not have an executive status, we have not yet found any desirable, effective relationship with other systems and provinces, and have faced serious obstacles from the beginning.”

Molaverdi has been appointed advisor to the president on citizens’ rights, whatever that may be in a country that is the world’s top violator of human rights and holds the record of per capita executions, 3500 only during Rouhani’s first term which includes at least 80 women.

The other woman appointed to a non-ministerial post is Laaya Jonaidi, presidential deputy for legal affairs. In order to take on the role, she was forced to wear the head-to-toe black robe called Chador, to be eligible to work in a government position.

It has been accurately pointed out in some press reports that Ebtekar and Molaverdi had not been promoted in status as compared to their previous posts. (The state-run Rouydad website, August 10, 2017)

Some circles who had counted on Rouhani’s election promises have been extremely discouraged by Rouhani’s betrayal. Parvaneh Salahshouri, heading the so-called women’s faction in the mullahs’ parliament, criticized Rouhani. “It is incredible and shocking that the president has ignored half of the Iranian society.”

Salahshouri lamented, “Creating equal opportunities for women and elimination of gender discrimination was among the promises made by the president (during his election campaign). Unfortunately, not only women were not granted equal opportunities, but they were granted no opportunity!” (The state-run ISNA news agency, August 9, 2017)

In an open session at the parliament on August 9, 2017, Salahshouri reiterated, “Iran is among the few countries in the world whose women do not enjoy any senior position as political decision-makers… Today, more than half of (the country’s) university graduates are women. Women are present in various economic, political, social and cultural realms. However, when it gets to appointing women as ministers, the excuse is their lack of high-level experience. And this vicious cycle goes on and on.”

She further revealed, “Gender gap is one of the criteria for evaluating the development of any country and Iran ranked 139th in 2016 among 144 countries.”

Since the mullahs’ religious dictatorship relies on misogyny as a pillar, Rouhani and his government need to defend and adhere to the same principles. Even if Rouhani had appointed several women to his Cabinet, it would not have solved women’s problems.

To resolve women’s issues, they need to remove the numerous obstacles that presently exist and are built into Iran’s ultra-male-dominated political system. This is why the mere presence of one or a few women in the cabinet are not sufficient to eliminate discrimination against women and close the gender gap on economic and social fronts.

Women face discrimination in numerous ways both in law and in practice under the fundamentalist regime ruling Iran. They confront unequal rights in marriage and divorce, discriminatory inheritance laws, lower levels of legal compensation and “blood money”, their testimony amounts to only half of a man in court, and they need to gain permission from their father, husband or brother in order to leave the country.

They are marginalized in the economy and hired mainly in unofficial service sectors with wages far below the minimum wage and without any insurance. Their economic participation amounts to 13%, at maximum.

So, Rouhani’s failure to appoint a single woman minister to his Cabinet denotes that the Iranian regime does not have the slightest capacity to tolerate even a symbolic gesture to recognize women’s right not to be excluded from a senior position on the basis of their gender. This means that the misogynous regime in Tehran cannot let loose on the suppression of women and back down from denying their equal human rights, lest it would lose its grips on power.

Iran: Forced marriage of small girls is on the rise