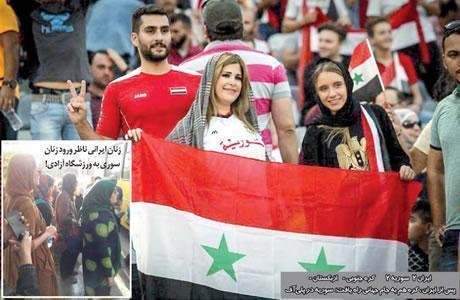 Once again, Iranian women were left out of the stadium and deprived of their basic rights.

A few women had been able to buy tickets online a week earlier. According to the state-run press, in the early hours of the sale of tickets, an option for women’s tickets appeared on the ticketing website. Shortly afterwards, however, the Football Federation denied any arrangements that would let women enter the stadium for the game.

“There is no plan to allow the presence of women in Azadi stadium for the Iran-Syria match,” the football federation said in a statement, blaming the accident on a “technical glitch.”

The company selling the tickets also announced that the option for sale of tickets to women had been activated due to a technical error.

As a result, once again, Iranian women stayed behind closed doors and were not allowed to watch the match.

The Guardian wrote, “Syrian women are allowed into the stadium but Iranian women are kept out, despite initially being allowed to buy tickets… A group of women who went to Tehran’s gigantic Azadi stadium were told they could not enter. When they started demonstrating they were threatened with arrest.”

“Iranian women, even those who had managed to buy tickets (apparently due to a technical glitch), were denied entry and kept behind locked gates at Tehran’s Azadi Stadium, where the match was held on September 5.

“Many took to social media to express their anger over the long-standing ban on women entering stadiums — under the excuse that stadiums are not a safe place for them — and the double standard of allowing Syrian women to attend, which they say is humiliating.

“‘They didn’t allow us into the stadium,’ tweeted football fan Banafshe Jamali.

“‘They took pictures [of us] and threatened to arrest us. They collected our tickets and took them away,’ she wrote.”

Protest to the discrimination against Iranian women led to the hacking of the website of the Football Federation on September 6, 2017. They challenged the federation on banning Iranian women’s entry to the stadium.

The Iranian regime’s ban on entry of women to stadiums was also noted by the UN Special Rapporteur on human rights in Iran. In Article 92 of her report, she wrote:

Women continue to be banned from watching sporting events in stadiums, and several female athletes have been restricted from participation in international tournaments either by State sporting agencies or by their husbands.

In March, a number of Iranian female billiard players were banned from competitions, allegedly for “violating the Islamic code of conduct.”

In April, female participants in an international marathon held in Tehran were required to run separately from men and on a shortened route.”