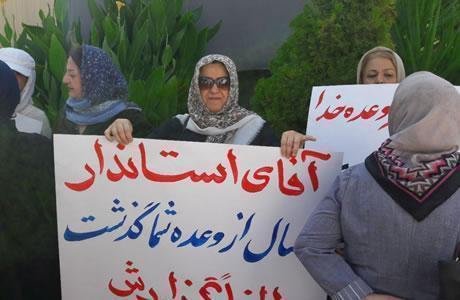 Retired women held two simultaneous protests in Tehran and Sari (capital of Mazandaran Province in northern Iran) in the morning of September 16, 2017.

In Tehran, more than 2000 protesters gathered in front of the Vahdat Hall. Tehran retirees were joined by colleagues from the provinces of Isfahan, Central, south, north and Razavi Khorassan, Gilan, Mazandaran, Kermanshah, and Alborz.

In Sari, the retired women gathered outside the Governor’s Office. Despite intervention of the State Security forces who tore up their banners and tried to disperse the crowd, the women protesters remained in the place and expressed their demands which included their pay raise.

Sahar Gholamali: Our movement is summed up in the word of hope!