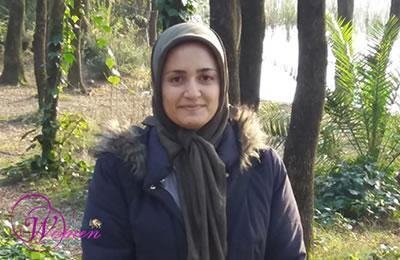 Sahar Gholamali: Our movement is summed up in the word of hope!

With her penetrating gaze, she looks around. After hearing the questions, she reflects for a moment and begins replying with a sweet smile. The passage of time and life’s adversities have not affected her cheerfulness nor her expressive words, perhaps because she made her decision years ago and pledged to fight as long as it may take.

And this is how she describes her life story:
My name is Sahar Gholamali.  I was born in Evin Prison and now I am part of the Iranian Resistance.
I know I might be a rare example to answer “in jail” in response to the question “where were you born?”  Prison is indeed the most dreadful, the strangest and the most difficult place to welcome a newborn.

During those years, in the 1980s, my parents, who were both supporters of the opposition Mojahedin (PMOI/MEK), were arrested for their political and social activities.
The only reason for their arrest was their belief in freedom and their opposition to a regime which had come to establish a religious dictatorship in Iran.

Shortly after the arrest of my pregnant mother, I was born in prison, in a place which lacked the minimum facilities, health standards, and even the least possibility of receiving proper love and care from my mother.
If it weren’t for the help of the other inmates, I don’t know what would have happened to me.
They helped my mother however they could. Some provided clothes, some gave their share of food, and more importantly, they dressed my mother’s wounds, and pampered me so I could survive and grow.

My father was also in prison. His interrogators put pressure on him to give in to their demands if he wished to see me. But he refused to bow down and cave in to their demand.
This was the greatest test for a young father: to see his newborn daughter in exchange for betrayal and cooperation!
My father, however, courageously chose the more difficult option and bravely stood up to his enemies to his last breath. Eventually he was executed in the ‘80s without ever seeing me.

I spent the first year of my life in prison until I was taken out with the efforts of our family and friends. So I grew up away from my enchained mother.

I was about 4 years old, when my mother got released from prison and we went to Ashraf, Iraq.
In Ashraf, I was able to go to school and study like many other kids my age.

A few years passed and the situation changed for worse with the start of the war and the US attack on Iraq.
The bombings continued day and night and it was not safe for children to stay any longer.
With the help of the PMOI, my mother decided to send me abroad, to a safer place.
I went to Canada and was embraced by a family who provided me with a very comfortable and privileged life. I had good friends, good life, good education and whatever that a young girl could wish for. But during the quiet moments when I had the chance to reflect, I would reminisce about my identity, the sacrifices of my mother and my father’s courage, memories which never faded. It was as if there was a calling not to forget my father…nor my mother and my country, Iran.

As I grew older, I began to read about Iran and the Resistance, particularly about the PMOI. Whatever information available about Iran was about the dictatorship, the arrests, imprisonment, torture, and executions! Suppression of women, imprisonment of youths, and blocking all means of freedom of expression!

On the opposite end of the continuum was the Resistance and the PMOI, a group of women and men who, like my father, had chosen to pay any price it takes to free their country.  They had given up their families, children, careers, and all the things we strive for in life.

Often times during my readings, my mind would wander off with such questions as how was my father able to resist seeing me despite all his fatherly emotions towards me?  Could it be so simple for a father?
How come my mother was arrested and imprisoned while pregnant? How did she endure all that torture with a baby inside her? It’s even hard to conceive of a pregnant woman inside a prison cell.
How did thousands of women, such as my aunt Azam, pay the price of humanity by withstanding severe tortures to be the teachers and role models of our generation and generations to come? So…
So there must be a will within us that can guide us through the hardest of difficulties!
It can make the impossible possible! It can make one productive!
So…
I can also want for the children in Iran to be able to enjoy the same beautiful and complete life I have in Canada!
I can willingly and consciously give up my desires and blessings and join a Resistance which has the goal of bringing such goodness to an 80-million nation!

That’s how I made my decision and now I am in the Iranian Resistance among one thousand women who have been labeled as “the heroines of Iranian history.”
Honestly, I have come across many heroes in various books and stories but I never thought that one day I could be part of a group of people who were dubbed “heroes.”

At the same time, one thing has always been very close and conceivable to me: That my father can see me more than any other time and he smiles at me, a smile filled with honour and pride for standing and persevering.