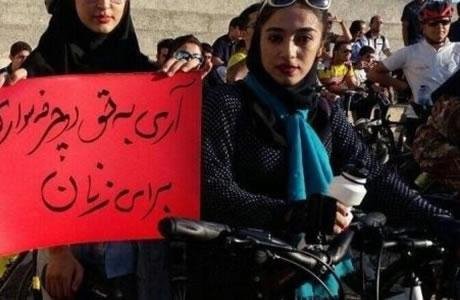 Leila Mohammadzadeh was arrested while explaining the articles of the Universal Declaration of Human Rights for a group of women in a place near Zibar Lake in Marivan, Iranian Kurdistan.

She faces legal prosecution. She is also charged with “inciting women to reject Islamic norms through riding bicycles in public.” Her complainant is the State Security Force.

Mohammadzadeh had previously issued a statement in which she had accused Rouhani of giving promises for improvement of women’s rights, but not delivering on them after his victory. there were people who had used improving women’s rights as their election slogan, but that nothing had changed after their re-election…

Presently, women face legal prosecution and arrest by the State Security Force if they ride bicycle in public in Marivan.

Iran: More than 30 young women and men arrested in a private party