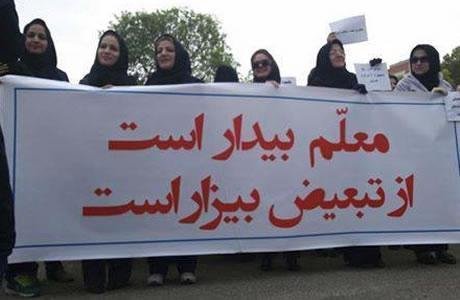 October 5, marks the World Teachers’ Day. It is a day to mobilize support for teachers and their rights.

Teachers have the greatest impact on the culture, spirit and thoughts of future generations. Therefore, their status bears tremendous importance for everyone especially the government. The situation of teachers in Iran, however, is just the opposite.

Women make up almost half of the teachers’ population in Iran. They are inflicted with severe poverty and at the same time face numerous social and legal discriminations because of their gender.

Every official employee of the Ministry of Education earns 1.4 million toumans per month ($400) while the poverty line stands at 4 million toumans ($1180). That means that teachers officially earn less than half of what they need to subsist.

To avoid paying even this meager salary to the teachers, the Iranian regime refuses to officially employ them. Despite long years of experience, many teachers work on temporary contracts and their monthly salary is between 300-450,000 toumans ($88-133). They do not enjoy any benefits. This income is way below the minimum wage of 930,000 toumans ($275), and still, it frequently happens that teachers do not receive any salary for months.

Presently, many teachers work two or three shifts to be able to provide for the needs of their families. Obviously, this situation has occupied teachers, leaving them with no energy to concentrate on the education of children.

Women have actively participated in these protest demonstrations despite being brutalized and arrested by the state security forces.

Teachers have been protesting to low wages, temporary employment, difficult working conditions, lack of insurance and non-payment of past due wages for consecutive months. They also demand freedom of imprisoned teachers rights activists, and balancing of retirement pensions, elimination of discrimination, full enactment of Article 41 of the Labor Act, and immediate increase of the salaries of working and retired workers and teachers based on the Minimum Expenditure Basket (MEB).[1]

Recently, a Ministry of Education directive was leaked out to the media which outlined the qualifications for the employment of teachers. The directive containing 17 articles listed a series of unjustified restrictions imposed on applicants for teaching positions. Gynecological problems, infertility, extra facial hair, shortness of one leg, heavy accent, were among the long list of illnesses and problems mentioned as reasons for rejection of applicants. Although the Ministry of Education backed down and withdrew this directive under the pressure of public opinion, but a spokesman for the Ministry admitted that the directive had already formed the basis for the employment of teachers for a good number of years. (The state-run Fars news agency, August 23, 2017)

[1] Article 41 of the Labor Act has obliged the Supreme Labor Council to designate the minimum wage every year based on the percentage of inflation. This minimum wage must be enough to provide for the expenses of a family.