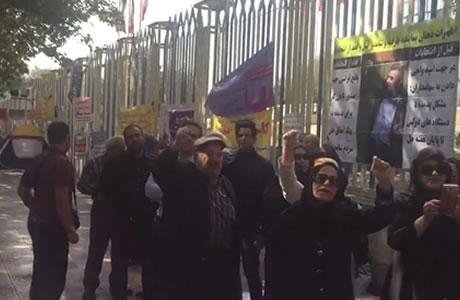 A group of Iranian women completed their 22nd night of a round-the-clock sit-in protest in Tehran on Saturday, October 7, 2017, to protest looting of their deposits by the Caspian Institute affiliated with the Islamic Revolutionary Guard Corps (IRGC).

The protesters, settled outside the Judiciary’s building, addressed Rouhani’s government and chanted, “No one benefitted from you,” and “Caspian has stolen and the government has supported it.”

On the same night in Boushehr (southern Iran), people whose deposits have been looted by another state-backed institute, Arman, gathered outside the company’s building to demand their stolen deposits.

All the participants in this gathering were women. Using a megaphone, they explained how their deposits had been plundered by state-sponsored officials of the company.