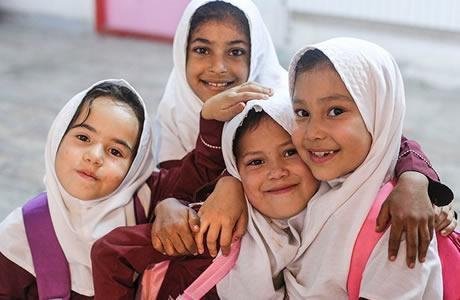 In 2012, the United Nations designated October 11 as the International Day of the Girl Child in an effort to draw attention to the special needs and problems of girl children and help them achieve their human rights such as education, nutrition, equality before the law, medical care, as well as prevention of violence, discrimination and forced early marriages.

Obviously, the mullahs ruling Iran have nothing to do with these international goals as they have set the age of criminal accountability for girls at 9 and force them to cover their hair from the first day of school.

Iran’s ruling officials do their best to marginalize young girls and imprison them by their misogynous laws before they reach maturity and demand their human rights.

Instead of observing the International Day for the Girl Child which seeks to ensure their health and progress, the regime holds appalling annual gatherings called, “jashn-e taklif.” In these celebrations, 9-year-old girls are officially recognized as religiously mature and have to account before the law.

In the following sections, we will glance over the regime’s record, the plight of Iranian girl children and the problems they face.

Illiteracy and dropping out of school

From the mullahs’ point of view, homemaking and bearing and raising children are the main responsibility of a woman.

Zahra Ayatollahi, head of Women’s Social and Cultural Council, told the regime’s Supreme Revolutionary Cultural Council, “Having contacts with their husbands’ families has priority over all sorts of chemistry, physics and math formulas for girls.” (The state-run daily newspaper of Qanoon, January 3, 2017)

The official statistics collected in 2006 reveals that there are over 3.2 million children deprived of education in Iran. (The state-run Mehrkhaneh website, December 5, 2016)

The latest statistics come from the parliamentary Research Center in 2015 that published the figure of 4 million for the number of school drop-outs.

In a parliamentary session on December 16, 2016, the Majlis deputy from Zahedan (southeastern Iran) declared that there are 156,000 Baluchi girls deprived of education. The director of the Education Department of Dezful (southwestern Iran) said girls comprise 60 per cent of 500 students who have been deprived of going to school over the past three years.

Reports indicate that Tehran and other capital cities are not exceptions. According to the state-run ANA news agency, girl children in the Herandi district of Tehran cannot continue their education due to the corrupt social atmosphere in that area, namely a large number of addicts and people who sleep on cardboard boxes in the streets. The girls cannot even leave their homes. The phenomenon of girl children dropping out of school is spreading while Iran ranks 120th in the world with 9.5 million illiterates in the country.

With the spread of poverty and lack of social support for destitute families, the phenomenon of child laborers has become catastrophic in Iran and a considerable number of these children are girls.

Nahid Tajeddin, member of the board of directors of the Social Commission of the Majlis, set the number of child laborers in Iran between 3 to 7 million. She admitted that because the identities of most of these children have not been registered, there are no accurate figures available in this regard. (The state-run Salamat news, September 27, 2017)

In October 2015, the general director of Tehran’s Department of Education announced that there were 25,000 child laborers in the capital.

The number of child laborers in Isfahan, central Iran, saw 120 per cent growth in 2016 compared to the previous year, but the number of female child laborers during this period is said to be much more worrying. (The state-run Tasnim news agency, June 12, 2017)

Instead of supporting these children, Iranian officials treat them with violence. In September 2017, Tehran’s governor ordered the arrest of child laborers in the capital.

The marriage of girl children has been formally sanctioned by the laws of the clerical regime in Iran. The legal age of marriage for girls is 13, but the father and grandfather are permitted to force their daughters into marriage even earlier. In addition to creating mental and physical problems for the young girls, this paves the way for subsequent social ills such as divorce, addiction, violence and murder.

Alireza Kazemi, general director of the Department of Education in the Razavi Khorasan Province, northeastern Iran, simply admitted that the most important reason for girls’ deprivation from school and education is early marriage. (The state-run ISNA news agency, September 17, 2017)

In 2015, alone, some 37000 young girls under 15 years of age have been registered as married. Researches indicate that 27 per cent of the victims of early marriage are at first-grade high school. (The state-run Entekhab website, September 18, 2017)

Experts believe that early marriages have seriously increased in recent years. Unfortunately, with the spread of poverty in Iran, forced marriage of girls is the only remaining way for poor families to reduce expenses and balance their financial debts.

Even those girls who have good families and go to school become victims of unsafe systems and irresponsible approach of the educational staff at school.

Hossein Ali Shahriari, member of the Health Commission in the mullahs’ parliament, admitted that some 500 schools in Sistan-o Baluchistan Province are made out of mud, stones, and sheds which make education difficult for the children. (The state-run Jam-e jam network, October 9, 2017)

On September 1, 2017, the bus carrying elite girl students of the coastal province of Hormuzgan, southern Iran, which was taking them to the students’ camp in Shiraz, turned over on the way. Twelve girl students died and 34 others were injured. Three of those injured were transferred to Shiraz, four students lost their limbs or their spine was severed. This incident reminds a series of painful accidents for girls under the rule of this regime.

In September 2016, one of the walls of a school in Chabahar collapsed and a seven-year-old girl died under the rubbles.

All of the above make up the tragic plight of girl children in Iran, under the rule of the clerical regime. On the International Day of the Girl Child, let us pledge to do our best to help improve their situation.