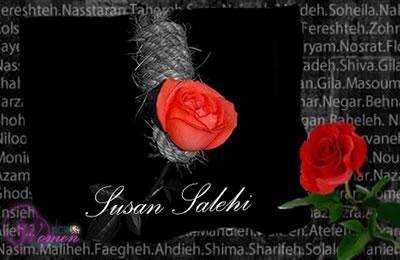 In the evening of one of the days in mid-September 1981, a number of new prisoners were being brought to our ward, as was the everyday routine. Among them was a young woman, with crimson red suit and pink shirt. She was fair with blue eyes and looked like a miniature… She was really beautiful.

She held her head up. She had been flogged on the feet, but she walked into the ward with some kind pride and did not pay any attention to the ward’s guard, Pasdar Raheleh. And from the very first moments of her arrival, she started arguing with her.

We softly took her hand and pulled her aside to prevent her from quarrelling with the prison guard, because in those days, it was so easy to get executed. With any simple excuse, they sent our fellow prisoners before the firing squad.

I asked her a few friendly questions and found out that her name was Susan Salehi. She was 16 and studied in high school. She was the only daughter of her family. Her father had a Ph.D. in political law, and her mother was a registered nurse in one of Tehran’s hospitals. We asked her when and why she had been arrested. She replied, “In the street and as a suspect!”

Years passed and in 1985, after going through so many difficulties, pressure and punishments, I saw my cell mates and friends again. What a sweet feeling it was to once again see the old friends and after a long time, I saw Susan again.