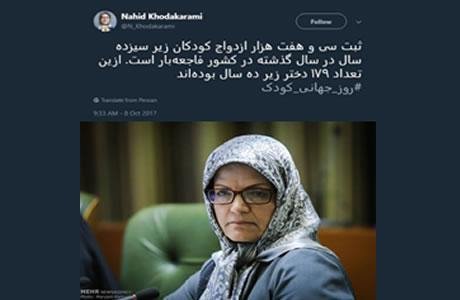 Nahid Khodakarami, a Tehran City Council member, admitted in a tweet that 37,000 children under 13 years of age have been married over the past year in Iran.

In light of the growing trend of child marriages in Iran, and the fact that 37117 had already been announced last year by the National Census Registrar, the figure announced by the Tehran City Council member must be considered as way below the actual figures. The same figure had been announced as 41,000 in August.

The Iranian law officially sanctions the marriage of 13 year-old girls. Furthermore, fathers and judges enjoy the authority under the law to endorse marriage of girls under this age.