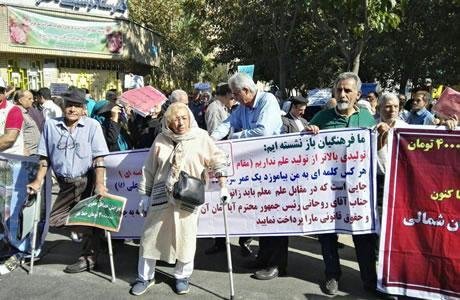 The gathering in Tehran took place outside the office of the mullahs’ president, Hassan Rouhani. A considerable number of women were among the protesters who held banners which read, “Decent life, dignity and efficient insurance are our inalienable rights”, “Raise our wages at least to 4 million toumans which is the poverty line”, “Plunderers’ hands off the retirement funds.”

A similar gathering took place in front of the Governor’s Office in Shiraz, southern Iran. The banners read, “Our wages are in Rials while the costs are in Dollars.”

The retired staff of the Communication Department of Babol, northern Iran, also staged a gathering outside the department’s building demanding their unpaid wages.

These series of protests took place only three days after nationwide protests by Iranian teachers.